Convincing the Crew
After two hours of sailing into the rising sun, Banoc’s charm on the officer began to diminish. The adventurers quickly tried to convince the crew of their vessel, the Sinful Kraken, that templar Haraxes (still being impersonated by Jax) had a change of heart and was heading out on a mission to make Athas into a better world. Although Jax was convincing, the party, especially Way-Lynn, Lena and Gwyn, tried a heavy-handed approach and it was not well received by the crew. In a moment of desperation, Banoc revealed himself as a water genasi, but the crew turned out to be superstitious about water elementals, and thought that he was an ill omen.

Despite their best efforts, the crew was not convinced and decided to attack the party, hoping they could turn around and make it back to Balic quickly to sort things out. The crew underestimated the abilities of the adventurers and the battle was over quickly, with the last half-dozen crew surrendering rather than be killed. They held fast to their sense of duty and were confined to the lower deck as prisoners.

The group decided to take the south turn around the Dragon’s Palate in hopes of making it to the Sea of Silt as quickly as possible. Tired from their long night, the party rested, although they still took watch, not fully trusting the pirate crew. Banoc did not take to their mode of travel well and suffered from silt sickness for the first few hours. Eventually he got a bit of rest and was refreshed. 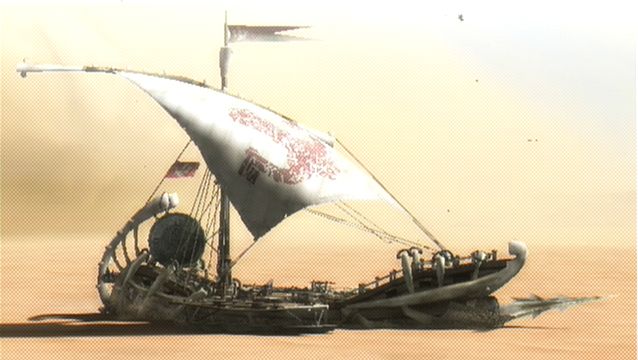 The Sand Dragon
Daqiq startled from his nap to a commotion on the upper deck. He ran up to see what was the matter and found everyone looking behind at another silt dromond moving to intercept them. The vessel was similar to their own, but moving much faster, indicating a more powerful psion at the helm. As it approached they could see the sail had a icon of a dragon atop a mound of sand.

Helpless, the pirates and adventurers watched as the Sand Dragon closed on them. Banoc thought of trying to cover their movements by controlling the weather, but the Sand Dragon would be in range to fire long before his magic could start to take effect. They crew prepared for battle, knowing that they were outnumbered by least a factor of two.

As the Sand Dragon neared to two-hundred feet, they party heard the voice of the Sand Dragon’s commander ordering them to stand down and prepare to be boarded. Gwyn recognized the voice as that of Kelvor’s brother. He had apparently decided to hunt down their group personally. The party unanimously agreed to not give up without a fight. Banoc and Gwyn moved to the back of the Sinful Kraken while the rest started to man the ship’s weapons.

The two ships exchanged a volley of shots from ballista and mangonel with only minimal damage to either ship. Gwyn and Banoc release a storm of fire at the Sand Dragon as it closed to just over a hundred feet. The fire ripped through the vessel, destroying most of its weapons and setting it ablaze. The Sand Dragon’s crew was able to take cover and avoid the majority of the fire, but now had to concern themselves with the ship, which was damaged.

The Sand Dragon’s helm was becoming mangled by fire as it continued on at full speed directly into the aft of the Sinful Kraken. The horrible sounds of splintering wood and bone from the ships was soon quieted and overtaken by the shouts of both crews as they prepared to do battle. To the surprise and terror of those aboard the Sinful Kraken, they appeared to be outnumbered three-to-one.