Stepping through the portal the party found themselves in the Astral Sea, a new experience for Phyll, but somewhat familiar for the others. As they looked out onto an endless silver sea numerous color pools were visible. The spellcasters felt cut off from their sources of magic, without land or access to the elements. As the contemplated their next move, a shape began to form in the distance. As the shape came closer it appeared to be some type of sailing ship, moving through the Astral Sea, accompanied by a large winged lizard with deep red scales. 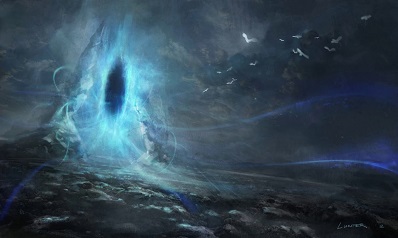 Prepared for battle the party was surprised to find the crew of the ship somewhat friendly and eager to talk. They learned that the crew of the ship were part of an army lead by a queen with plans to rule over Athas. The captain, Raskine, invited to party to return to their city and learn more their queen and her plans. Along the way some of the features of the Astral Sea were discussed including color pools that allow travelers to enter other worlds and the psychic wind which assaulted the mind more than the body.

Eventually the group arrived at Galanaki, the city of the Githyanki in the Astral Sea. Their shipped docked at a tall tower and the group was escorted through the city towards the large central palace. Once their more guards joined the procession, which eventually ended at the throne room of the queen, Trinth. Trinth questioned them regarding what she called the unusual powers of the mind that the people of Athas possessed. After additional questions and answers, the party came to the decision that Trinth, although not trustworthy, might prove to be a valuable ally against the sorcerer-kings and a potential tool to bring about a change and a new Green Age.

Offering themselves to Trinth, the queen agreed to accept their service, if they could prove themselves in an arena. The party agreed any they were dropped some 30 feet into a large area with numerous colored doors. The queen proclaimed "You must now choose your fate. One of these doors leads to freedom, the rest have an inhabitant that will be most pleased to see you. You must select the correct door, or die trying. If you choose incorrectly and survive, you may choose again.”