Secrets Revealed
Although the party was unsure what to make of the possible relationship between Kelvor and the defiler Tethrades, they knew they didn’t want to simply hand him over without answers. Jarvix used the Way to summon motes of nothingness to hold the House Shom troops in place. Elleandra’s magic caused they to experience visions of hordes of flesh-devouring sprites and she summoned a small tornado to lift one of the muls into the air. Gwyn wrapped her foes in fiery serpents dragging two of the guards and holding them together.

The House Shom forces were well trained and caused many injuries to the party. Morg was overwhelmed by the three warriors he was facing and briefly fell. Vinara was able call upon her primal powers to keep Morg and the rest alive, but it was a deadly combat. Kelvor engaged Tethrades with a passion – his focus on the defiler was an indication that there may be some relationship between the two.

During the fight Tethrades provided critiques on Kelvor’s use of the Way, praising him for his abilities and taking credit for helping him reach such power. Dalem and Marisol remained mostly neutral in the conflict, apparently each being confused by the turn of events. Only when Gwyn was severely injured by some caravan guards that came in to investigate the disturbances did Marisol use her powers of the Way to defeat them.

Finally free of some of the restraining magic that was affecting him, Dalem made a break for it and disappeared through a secret door behind of the statues in the room. Along the way he grabbed one of the metal cylinders containing the plague infested shaqat beetles. Marisol broke free from the combat and headed after him, saying nothing to the others.

As the tide of the battle had clearly shifted away from the forces of House Shom, Tethrades used his magic to open a doorway and disappear from sight. The party quickly mopped up the remaining forces and the additional caravan guards that had just entered dropped their weapons and fled from the ziggurat. Although they wanted to pursue Dalem, Marisol and Tethrades, the party demanded answers from Kelvor.

Kelvor reluctantly explained that his true name was Dravus and in his past he had been a member of the Balic navy as was tradition in his family. He had been approached by Tethrades, a praetor of Andropinis, to be recruited for a special project and to defy a preator meant death. The special project was designed to unlock psionic potential in its subjects, but was more akin to sadistic torture than true research. Eventually he fled the city and adopted a new name and life for himself.

Satisfied with Kelvor’s answer, for now, the party decided to search the ziggurat.

Betrayal
The first floor of the ziggurat contained a spiral staircase heading up to the second floor. There were two other rooms on this level, both open to the outside through large cracks in the structure. One room was completely filled with rubble, its contents and purpose unknown. The other larger room appeared to be a laboratory where research was being conducted, likely on the shaqat beetles. The crack in this room appeared to be a mix of natural and worked stone, suggesting a passageway may have once connected this room to the outside.

The second floor contained four small rooms around the central stairs that continued up. A throne room and dining room were in obvious disrepair, but not open to the outside. The large crack in the ziggurat did break through in to the other two rooms. One of which had a large crack and hole in the floor the purpose of which was not readily understood. The final room on the floor appeared to hold a number of writings and tables but the weather and time had all but destroyed the contents.

On the third floor there were only two rooms, neither of which was affected by the crack in the side of the ziggurat. One room appeared to have been a library of some kind, but the contents were is complete disarray and it would have taken a significant amount of time to piece together anything, time that the party did not have. The second room was relatively intact but empty. There were strange markings on the floor but that was all. The central staircase ended here, but a secondary staircase continued up.

The fourth floor was a single large room with an arcane circle on the floor. The exact nature of the circle was undetermined, but it appeared to be for some type of summoning magic. The circle appeared to be inactive and possibly damaged. From the roof of the ziggurat above, sounds of a struggle were heard and the party ascended the stairs quickly.

On the top of the roof Dalem and Marisol were locked in a struggle and as they fought, the party could overhear what they were saying…

“You promised to help my family regain their fortunes!” Dalem cried out “We both could have been rich beyond measure. How could you betray me?”
Marisol retorted with a stony look in her eyes, “Yes I promised Dalem, but I lied. The Shadow King will not allow your plan to succeed!”

The party was more confused than ever to have Marisol invoke the name of the Shadow King, the sorcerer-king of the city-state of Nibenay. Noticing her daughter for the first time, Marisol called out to her, “Gwyn, help me defeat this scum and make your father proud. Not that fool Jalek. Haven’t you wondered about the source of your draconic nature?”

Unable to hold back any longer, the party attacked Marisol and Dalem. Gwyn pleaded with the party to subdue Marisol so she could be answers she needed. Her friends didn’t appear to care that much and some of their attacks were lethal in nature. Dalem was the first to drop, nearly pushed over the edge several times. Gwyn’s magic finally hurled him and the canister off the top of the ziggurat. Marisol called out to Gwyn one last time; “Your father will reward you for your assistance. Now convince your friends to join us in the service of the Shadow King or they will perish.”

As the fight continued a hot dusty wind began to blow around the ziggurat, intensifying every moment and obscuring the ruined city below. Vinara’s magic was able to keep the storm off of the ziggurat itself, but outside here influence it became stronger and stronger every moment. The speed and intensity of the storm was clearly not natural.

Gwyn and the party had no desire to serve any sorcerer-king and combat continued, again with Gwyn pleading to capture Marisol and not kill her. Kelvor and Elleandra showed restraint in their attacks, but the others appeared more eager to dispatch an agent of a sorcerer-king. Kelvor was overwhelmed by Marisol’s use of the Way and fell. However, eventually Marisol fell to their attacks, Elleandra’s psychic assault knocking her unconscious. 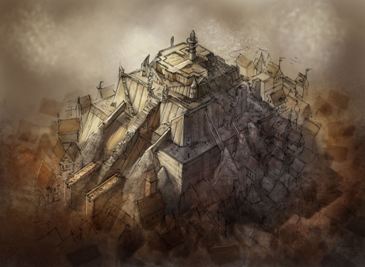 As they tended to Kelvor the sand storm dissipated as quickly as it started and the party was shocked to see that beneath them was a city that appeared to be inhabited. The ziggurat, that moments before was cracked and ruined, appeared to have been repaired. Although it was difficult to make our from this height, there were no signs of the House Shom caravan and the people below appeared to be dressed in archaic clothing. It was then that the party noticed Marisol was not to be found.

The Descent
A small commotion below alerted the party that their presence on the top of the ziggurat was likely noticed. Rather than attempt to scale down the side of the steep structure, they descended down into the ziggurat through the stairs. Elleandra noticed that her tree felt incredibly distant and that Morg was unable to clearly hear the spirits that usually spoke to him. The party suspected that the strange storm had transported them to some different place and time.

The summoning circle on the fourth floor was intact and clearly active. The entire room was protected by physical and magical wards, nothing like the ruined room they had just left moments before. The party was able to locate and suppress the wards long enough to exit the room safely.

On the third floor the found that the library was intact and well stocked with books, scrolls tablets and other writings. Jarvix investigated this area and found several intact works that were of interest to him. Elleandra’s orb was confused, excited and terrified but it urged her to investigate the other room on this floor, the door to which was closed and warded as well. After bypassing the protection, she, Vinara and Morg entered a room to find a closed sarcophagus where nothing had been before. Cautiously opening it, they found a body inside, completely still, and Elleandra recognized it as the body of Kalid-Ma. Vinara gently poked the body with her spear and seeing no response, she slid the spear into his chest as Morg used his axe to chop off the head. With his typical style, he took the severed head as they left the room.

The rooms on the second floor were closed in this ziggurat and the group took a few moments to investigate. The throne room was intact and dusty as if it hadn’t been used too frequently. What had been the room with the hole in the floor now held a large cistern of water – a precious treasure. Where ruined tables and papers had been there was an organized collection of documents that appeared to pertain to the normal operation of the city. Strangely the dates on the paper showed the current year to be Mountain’s Reverence in the 176 King’s Age. Some commotion could be heard from the first floor, but nothing specific could be determined.

The party cautiously headed down the to main floor and discovered that the secret door to the main entry hall was closed. The small room contained a large brazier and it was obvious that the crack had been repaired. Instead of a laboratory, it appeared that a holding area or jail was in the larger room. The broken wall in that room too had been repaired offering no exit from the ziggurat. The party could make out some of the content of the conversation in the main entry room – there appeared to be a disagreement about whether or not intruders were in the pyramid. A slight shuffling could be heard and it was then that the party noticed that in the jail cells were three women…