Ancient Discovery
Upon their arrival at Keld, the group was escorted to meet with Lyanius, the village elder. With typical dwarf brevity, a few pleasantries were exchanged and then he got down to business. A few weeks earlier a new excavation in the ruins of Kemalok opened a passageway that clearly had not been open in a very long time. A group of explorers ventured in, but were not heard from again. A second group went in to locate the missing dwarves but only located ancient scrolls. Leaving the scrolls behind, they went back in to try their luck, but were not heard from since.

Lyanius tasked Morg with going in and searching for the missing dwarves and discovering if there were any threats to Kled in the tunnels. Morg and the rest agreed and sought to use this opportunity to look for a suitable location to plant the seed to the Tree of Life. Before departing, Kelvor asked if they had any information relating to the Swords of Tyr. Unfortunately the dwarves had nothing to share on those weapons of the Veiled Alliance.

Curious about the recovered scrolls, the group examined them, but found that the language was not familiar to any of them. Using her ritual magic, with the assistance of Jarvix, Elleandra and Vinara, Gwyn was able to translate the writing on the scrolls, which were referred to as the Scrolls of the Sonlinor. With new insight into the history of their world and possibly the sorcerer-kings, they felt as prepared as they could be.

Travelling Underground
Escorted by dwarven guards, the group passed by the Tower of Buren and headed into the newly opened areas. At the entrance to the tunnels, they left their escorts behind and began their search. The tunnels all began to look the same and they risked getting lost, but Vinara’s keen eyes kept them on the trail left by the dwarves. Their path led them to a section of the tunnels that had sharp rocks jutting out from the floor and walls. The brute strength of the party was sufficient to push through and not suffer too many cuts, although a few injuries were taken.

Not far beyond the sharp rocks, a sinkhole had formed in the passageway, blocking their progress. Although the hole didn’t appear too deep and Gwyn’s dragonling was able to bring ropes across without trouble, most of the group ended up in the pit and suffered some injuries, although mostly to their pride.

Their wanderings led them deeper into the earth and although the trail became more difficult to follow, Gwyn and Vinara were sure they were headed the right direction. The path before them became slightly obstructed with strange red and silver crystalline growths. These crystals were unfamiliar to any in the group and appeared to be solid and liquid at the same time. Unsure of how to proceed, Gwyn tried touching one of the crystals were her hand; immediately regretting it as it caused her intense pain. They managed to pass by the crystals without suffering to much, although they found that completely avoid contact was virtually impossible.

The passageway came to an end where fresh boulders appeared to have fallen, blocking the way. Gwyn and Morg were able to pry many of the rock out of the passageway, while Jarvix made sure that they would not cause a further cave in. When enough of the rocks were moved, they could see a large chamber ahead of them, with a faintly glowing crystal on a raised pedestal.

The Crystal of Ebon Flame
The chamber before them was empty except for a few traces of the crystalline material found earlier. Feeling they had found what they were looking for, and seeing no immediate danger in the room, the group moved forward towards the pedestal. Still seeing no threats Morg moved up on to the raised platform and grasped the crystal. He looked distracted for a moment and then tossed the crystal to Elleandra, who caught it instinctively. She too looked distracted for a moment, and then stowed the crystal.

When the crystal was removed shuffling and skittering was heard in the previous silence. From around several pillars, a dozen dwarves moved out into sight. It was obvious that the missing dwarves were no longer alive, as these could be seen to be grey and decaying with red crystals protruding from their skin and dark red liquid oozing from their eyes, mouths and open wounds. Between the dwarves, swarms of tiny red beetles with barbed pincers dripping red liquid from their crystalline bodes. 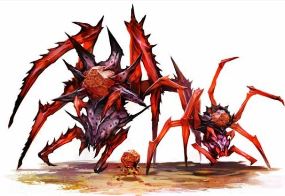 The party quickly formed a ring around bear and began to defend themselves against the deadly creatures. The battle was joined by four 10 foot tall creatures resembling crystalline spiders. Elleandra, Jarvix and Gwyn attempted to destroy the swarms and dwarves with their spells, while Kelvor and Morg concentrated on the larger creatures. Vinara assisted where needed and used her healing abilities to keep the party from being overcome by the deadly creatures.

During the attack, the swarms approached and, horrifyingly, entered Elleandra, Morg, Kelvor and Jarvix who briefly turned on their allies. Fortunately, they were able to shake off the effects of the beetles and expelled them from their bodies. Kelvor used his abilities with the Way to attract and keep the attention of as many of the creatures as possible, but he was overwhelmed at one point, briefly dropping unconscious.

In the end, the group was able to defeat these foul beasts and was able to take a brief rest before returning to the surface.

So… In retrospect pretty sure we should have told the dwarves about the seed before we went in. Hmm.

I was expecting that… once again proving players will never do what the DM expects.

I think we should probably return to the dwarves and let them know what’s up. Maybe see if they have some ideas regarding the placement of the seed. We’re homies now, after all.

They have been very friendly since you rescued some of them on your way to the Lost Cistern. And helping to free them from the occupation forces was a nice way to earn their trust too.

Yeah, precisely. They’d pour one out for us if we died in battle.

In striking contrast to the halflings who honor their allies that have fallen in battle by eating them. No joke.