Guests of the Shadow King
As they emerged from the forest into a clearing, the party was confronted by a large number of well-armed warriors. A young woman in the garb of a templar of Nibenay stepped forward.

I am the templar Marika of Nibenay. We mean you no harm – we know you are enemies of the Forest Queen, and only wish to escort you to meet with our king.

The party was too tired and injured to fight and, as they detected no deception from the templar, they agreed to be escorted to Nibenay. Marika gave them each some fruits, which restored their vitality, letting them continue despite their weariness from their escape from Gulg. As they traveled, the party was surrounded by the human and half-giant soldiers, presenting not opportunity for escape. Marika pushed the party hard, moving for 12 hours a day and the forest made it difficult to move quickly. Along the way there was some brief discussions, but little information was gained from the Templar. The party came within sight of the city-state of Nibenay around on the third day.

Meeting the Shadow King
The vast walled city of Nibenay was before the party, every structure intricately carved with dancing figures, fantastic monsters and elaborate scenes. Rising from the center of the city was a fantastic form of the Shadow King’s palace, the Naggaramakam, carved in the shape of an enormous head. Passing through substantial rice paddies that lay around and even within the city itself the party saw a legion of slaves tending the fields under the eyes of overseers. 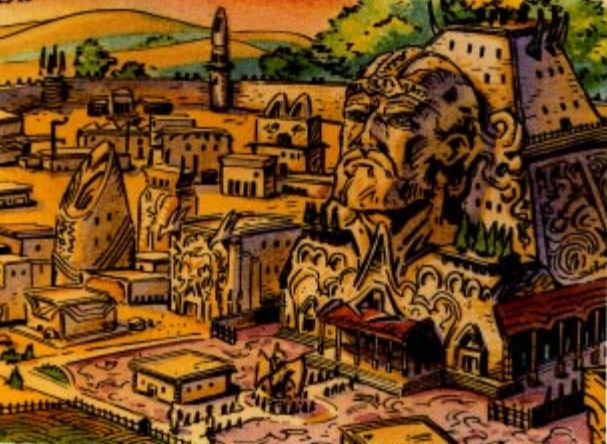 Inside Nibenay seethed with activity. Ordinary citizens hurried from place with place under the watchful eye of the Shadow King’s warriors. Slaves were hauling goods for merchants with crodlu and inix crowding the streets. As they were lead to the center of the city, they noted that even the paving stones were carved individually, although most of the decorations had been worn down by centuries of traffic. As they approached the palace, Marika spoke.

No mortal my enter the Shadow King’s demesne. His majesty will speak with you in one of his lesser palaces.

The interior of the palace was every bit as impressive as the exterior. At one end of the chamber was a massive statue with glowing blue eyes, recognized as that of the Shadow King. Waiting in the chamber were two of Nibenary’s consorts, one human and one mul each one wearing nothing more than some jewelry. A pair of half-giant guards stood beside each of them. Way-lynn recognized the mul as the High Consort of War, Bamandji.

There have been many rumors regarding your little band of trouble-makers. There are many questions to be answered. Speak truthfully or there will be consequences most dire.

The party was questioned for a while about their past exploits – Kira’s restoration of the land around Altaruk, their encounters with Dregoth, Kalid-Ma and Abalach-Re. Their goals for all of their actions were as important as their actions themselves. For the moment, the Shadow King pondered their conversations..

If you truly wish to make this world a better place, you will perform a task for me, one which I think you will find to your liking. The Forest Queen is in possession of an artifact that will enable her to completely dominate the spirits in the forest, increasing her power dramatically.”

I will transport you into the dungeons of Glug tonight. Lalali-Puy will be engaged in her Red Moon Hunt and her defenses will be weakened. Make your way to the iron door and retrieve the Stone of Abraxas which is held in the room beyond the door. Once you are in possession of the crystal, my connection with you will be amplified and I will be able to return you to this room.

By performing this task you will demonstrate to me that you are not merely anarchists who wish to see the remnants of civilization burn. You will also have revenge upon the Forest Queen for you imprisonment and there is a good chance that you will be able to recover what you have lost.

The party discussed their options and felt that to defy Nibenay at this time was not in their best interests. Jarvix and Iorskan were eager to get revenge on the Forest Queen as well as have a chance at the treasure they thought might be hidden in the dungeons. Elleandra performed an augury which revealed that either option presented danger, but aiding the Shadow King in recovering the Stone of Abraxas was the least dangerous path. “Delightful” was the only word spoken by the statue after they agreed.

Dungeons of Gulg
The party was treated to an excellent meal of meats, rice and exotic fruits from within the Crescent Forest. There was only a little time for social interaction with the High Consorts, but Nibenese culture frowned upon discussing outside business in the evenings. The party was allowed to rest until near midnight, when they were summoned again to the statue chamber. The statue’s eyes flashed blue and the party found themselves back in the dungeons of Glug.

The somewhat familiar mud and entangling roots were still confusing as the adventurers worked their way through narrow passages trying to find their way back to the iron-bound door they had seen during their last time in Gulg. They soon discovered they were not alone and encountered several mul guards while they wandered to dungeons. Elleandra and Way-lynn helped to control the guards and prevented them from surrounding the other party members.

As Jarvix wandered the dungeons he encountered Mogansho, who had recovered from their previous fight. Jarvix ensnared him with a thought and began hurling him about like a living weapon. Mogansho was knocked unconscious and Jarvix left him to rejoin the rest of his party. Taibela was also stalking the party and attacked Iorskan from the shadows. She disappeared and struck Elleandra, knocking her unconscious. When Taibela appeared again, Kira was ready and pounced on her, taking her head off.

Way-lynn located the iron-bound door and found it still guarded by the steel-clad Mul warriors. As they were engaged, the rest of the party moved towards the door, eager to acquire the Stone and any other treasures they might acquire. Mogansho was able to recover from Jarvix’s attack and made a desperate attack on the party. Iorskan turned to meet him and after a brief exchange Mogansho fell, this time for good.

The iron-bound door was protected by physical and magical protections and although there were keys found on Mogansho which opened the lock, it still took the group some time to bypass the other protections. With the door open, they saw a large room before them filled with all types of treasures. The center of the room contained a large pedestal, on top of which was a stone that could only be the Stone of Abraxas.

Way-lynn searched the room and discovered some of Morg’s gear and Elleandra searched for anything of significance. Elleandra, Jarvix, Kira and Iorskan worked feverishly to bypass the protections around the Stone, suspecting that they hadn’t much time before more guards, or worse the sorcerer-queen herself, showed up. Luck was with the party as they were able to acquire the stone before any more Gulgans arrived. Moments after the Stone was in their possession there was a flash of blue light and they were once again in the chamber with the stone statue of Nibenay.

This should end well.