Prison Escape
The Forest-Queen’s guards escorted the party deep into the interior of the great tree, down narrow stairs carved from the living wood. Mogansho and the muls kept a close eye on the party allowing them no chance to form a plan. The corridors were numerous, and their ability to observe and mentally map them was limited. Twisted corridors and gnarled passageways followed the giant tree’s roots and finally they reached the dungeons. 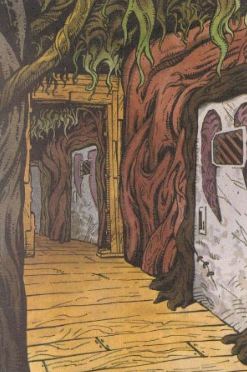 Mud and entangling roots hung from the ceiling in places, and the dampness was most unusual. Many prison cells were carved out of the roots with strong wooden doors barred from the outside. The passageway they were traveling lead to a heavy, guarded door. The door itself is made of thick wood and reinforced with a fortune in iron bars. The mul guards wore steel armor and had steel weapons in their hands and kept a grim eye on the party as they were lead up to it.

Mogansho ordered the party to surrender their gear as, according to the law in Gulg, the sorcerer-queen owned all property. The party, especially Morg, was unwilling to release their weapons and they charged the guards and Mogansho hoping to catch them by surprise. They guards were anticipating such action and were ready for trouble. A fierce battle began in the dungeons with the party attempting to defeat the guards and find a way out. As excepted the steel-clad muls were expert warriors and Mogansho was a battle-hardened commander. Way-lynn did his best to keep the guards focused on him, but as the fight continued, the party became separated from each other and were unable to present a unified front.

Several of the mul guards were defeated but more entered the fight, altered to trouble by the sounds of conflict or some other means. The battle turned against the party when Lalali-Puy herself appeared in the dungeons and proceeded to attack Morg. Kira was cursed by the Forest-Queen and suffered the same injuries as Morg. Iorskan and Jarvix did there best to keep the party standing under the assaults, but they were quickly becoming overwhelmed. Mogansho was eventually knocked down by Morg but Morg fell under the magical attacks of the queen.

Elleandra discovered what appeared to be a way out of the dungeons and the party moved with great haste to leave. Elleandra and Jarvix were able to distract the guards with their magic and powers of the Way, allowing the rest of the party to move past them without fear. Jarvix was the last to leave the dungeon and they hoped the distractions would give them a few moments head-start.

The Crescent Forest
They party found themselves outside the Mopti Wall in the Crescent Forest, surrounded by thick, tangled vegetation growing in a rich loamy soil with insects and birds everywhere. Like the Forest Ridge, the forest is a reminder of how Athas once was. Way-lynn knew that the isolated nature of the forest makes it a highly competitive environment and creatures in it were prepared to fight to survive and cautioned the party to be ready for anything. The setting sun gave the party a rough idea of the direction of Nibenay and they decided to head there as quickly as possible. The hope was that the unknown dangers in Nibenay would be better than returning to Gulg.

Kira used her magic to cloak them in the colors and textures of the forest, hoping that they would be much harder to track. Although they were tempted to have her summon the bird spirits again, Lalali-Puy’s affinity for nature made them reluctant to use such magic. They pressed on through the dense forest moving as quickly as they dared. As they traveled, they were constantly tempted to investigate areas of the forest that they came across and sent Kira in first.

The party stumbled into a patch of Blossomkiller plants and had to fight their way out. They party encountered a group of runaway slaves from Gulg, who did not trust the party, and a party of half-giants who attacked the party on sight. Kira found a spring in the forest with restorative properties, helping to refresh them after a long night of travel. After about 10 hours the party reached a clearing and decided to risk stopping to rest and recover some of their strength.

After a few hours their rest was interrupted when a group of well-armed warriors emerged from the forest. Way-lynn immediately recognized them as soldiers in the army of Nibenay, including half-giants of the Shadow Guard. They were shocked that Kira’s camouflage was penetrated and even more shocked when a woman in templar garb stepped forward and addressed the party…

“I am the templar Marika of Nibenay. We are here to escort you to the Shadow King!”

You have not met the sorcerer-kings of Urik, Draj or Balic, although you have seen him in the vision that Kira had.

This should go well.