Entrance to Gulg
Although the party had recovered some of their strength from the fight with the Gulgans, they were in no shape to contend with the well-trained Nibenese forces. The keen eyes of Elleandra and Kira gave the party enough warning to leave the area before the troops arrived. They quickly gathered the clothing of the nganga and judaga foes and Kira summoned the bird spirits to take them to safety. They flew northeast above the Crescent Forest towards the city-state of Gulg. After about an hour, the spirits began to fade and the party set down.

Morg told his allies all that he knew of his former city-state as they donned the gear of the Gulgan warriors. They decided that the safest course of action would be to leave Way-lynn and Iorskan outside the city as dray and half-giants were rarely seen. The rest of the party would enter the city-state by the Queen’s Gate, meet up with the Veiled Alliance contact, procure survival days and spell components and then leave the city.

The spirit eagles landed a few miles outside the city and the party headed towards Gulg from the south. Their first sight was the 20 foot tall hedge of tightly woven razor-sharp brambles, the Mopti Wall. As they approached numerous guards could be seen but the group was allowed to enter the city without any significant challenge. A feeling of unease came over Elleandra as she moved closer to the city – she could feel the anguish of the nature spirits enslaved by the sorcerer-queen. Jarvix directed them to the House of Outsiders where he was to make contact with the Veiled Alliance.

After arranging the meeting and purchasing some supplies they waited for the Veiled Alliance contact to show in a secluded section of the dagada. As they waited, the light crowd dispersed until they were all alone. Suddenly a large group of judagas surrounded them and demanded that the party accompany the warriors to have an audience before the Oba. Out numbered and still weakened from their earlier encounters, the party did not resist.

As the party was escorted deeper into the city, they were awestruck by the lushness of Gulg but also its primitive appearance. The city itself consisted of circular mud and thatch huts arranged into the dagadas – small community groups. Along the way, the party passed near to the city’s arena – the Field of Spears, but their attention was quickly drawn to the center of the city, where an impossibly gigantic agafari tree could be seen. Perched in its highest branches was a wondrous sight – Lalali-Puy’s palace. Beneath the bright and beautiful palace, deep in the shadows, the party could make out the houses of the nganga – foreboding and grim, decorated with ghoulish embellishments, bones, dessicated trophies, and the like.

Entering through the trunk of the mighty tree the party was led up winding stairs. At length, they entered a gleaming white, high-ceilinged chamber. Various slaves, courtiers and soldiers stood around the room, and at one end grew several large, gnarled trees which the party recognized as trees of life. “Abase yourselves in the presence of the Forest Queen!” bellowed a voice. At the other and of the room, seated on a throne carved from the wood of the agafari tree, was Lalali-Puy herself.

“Welcome bold adventurers!” She began with a heavy accent. “We have been told of your bravery and many adventures. We would hear one of your tales as told by you.” There was no mistaking her words as a request and Jarvix told of their encounter with Abalach-Re and her transformation. His tale was slightly embellished to downplay their involvement and ended with Lalali-Puy defeating the dragon. The sorcerer-queen and others in the hall appeared pleased with the story.

“Ah!” She breathed, “It is everything we had hoped for. Please, brave adventurers, accept our hospitality for a few days as an expression of our gratitude. Enjoy your stay in our palace. Everything you see is for your use and pleasure.” 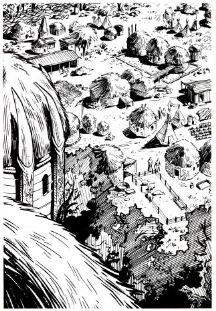 With that the party was escorted to a guest suite where they were reunited with Way-lynn and Iorskan, who had been discovered earlier by a patrol of Gulgan soldiers. Although they were unharmed and allowed to keep their weapons, it was clear they were prisoners and would not be allowed to leave the palace. Jarvix attempted to use the Way to get help, but it was blocked by some power greater than his. Elleandra assisted Kira in communing with nearby plants and animals and received confirmation that the sorcerer-queen and her templars were controlling most of the spirits of nature for their own dark purposes.

They next day the group roamed throughout the palace. Compared to all the other area of Athas they had seen, this was a lush, tropical paradise amid the broad branches of the agafari tree. They found large, luxurious huts, vast meeting chambers, pleasant sitting chambers, and a magnificent view of Gulg and the Crescent Forest beyond. Colorful birds filled the air with song, and iridescent lizards and insects decorated the mighty tree’s trunk and branches. The party was housed in great luxury, and were offered numerous delicacies and as much water and wine as they could drink.

As they rested back in their rooms, they had a visitor who introduced himself as Habban the Fetish Keeper, chief Nganga. Habban was very interested in Elleandra, her background and her magic. They conversed for several hours and it became apparent that he was much more interested in gaining information than giving it. Although he appeared confident, Elleandra sensed that he was rather insecure in his position and nervous about her and her companions.

The discussions were cut short when the party was interrupted by Mogansho the War Chief who was sent to bring them before the sorcerer-queen. They were asked to tell another story and this time Iorskan spoke about their encounters with the forces of Dregoth from the island of Waverly to the ruins beneath Giustenal. He mentioned the return of Kalid-Ma and the mirror they used to escape, both of which the queen and her court listened to intently. At the conclusion of they story, they were dismissed again.

The next day passed much as the previous day had and once again they were summoned before the queen and her court. This time Jarvix told the stories they had learned about the Cleansing Wars, the champions and their tasks. He used many of the sorcerer-kings’ true names during the telling and this caused Lalalai-Puy to become visibly annoyed for a few seconds. There was a brief moment when the party was tempted to start a slow clap, but the mood of the queen stopped them quickly. One member of the queen’s entourage, Shala the Hunt Mistress, spoke up apparently taking offense at the implication that the Oba was anything other than the Forest Goddess. She suggested the party be punished for their disrespect, but the request was not granted and the party was allowed to leave once again.

The following day Kira assumed the form of a colorful songbird and attempted to scout some of the areas of the palace they had not been allowed to enter. She uncovered a library filled with spellbooks of dragon magic and other mundane tomes. Another room held artwork of ancient origins, showing places and creatures never seen in modern times. The last room was a menagerie containing creatures from all over Athas. She returned shortly before the party was summoned before the queen for next story.

This time, the queen’s throne room was almost empty except for the queen, Habban, Shala, Mogansho and another woman. The queen addressed the party with a severe tone in her voice, “So, you have chosen to reject the hospitality that we so generously offered. What are the charges?” Habban spoke first accusing Elleandra of being an evil spirit of nature sent as a spy. According to him the rest of the party was guilty of treachery by not reporting her to the templars. The other woman, Taibela the Chief of Thieves, accused Kira of violating the restricted areas of the Palace and communing with evil nature spirits. Then Shala the Hunt Mistress slyly interjected, suggesting they give the prisoners a fighting chance by having them participate in the Red Moon Hunt in two nights. At this Lalali-Puy smiled and nodded ordering the party to be taken to the dungeons.

Mogansho began to lead them down from the throne room into the dungeons beneath the great agafari tree. The party began looking for an opportune time to escape…

I’m starting to think that maybe trying to incite the God-like Sorcerer Queen’s wrath was a… bad idea? Still not sure, though.

Well, it was a bit unexpected, but those can make for interesting twists to the story.

Looking forward to an escape attempt, and if not that, at least a very exciting and eventful participation in the blood moon hunt.

Still trying to figure out what morg would do