Attacks in the Night
Moving as quickly as possible the adventurer’s headed out from Altaruk towards Tyr. They had already been marching for many hours, but they pushed on as best they could. After three hours they decided to stop and take shelter in the rocky terrain. Morg took watch while the others rested and regained their strength. After a few hours Morg spotted a patrol of Balic legionaries that were following the same path and heading into the rocks. Morg woke his companions and they prepared for battle. 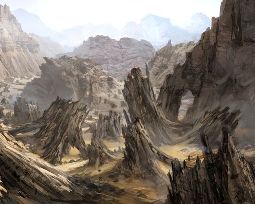 The legionaries consisted of praetor, a half-giant and half a dozen soldiers. Jarvix briefly contemplated attempting to talk with the praetor, but at the last moment he changed his mind and lashed out with the Way, catching the soldiers off guard. The rest of the party followed his lead and unleashed a flurry of attacks. The soldiers were tough and stood their ground neither running nor being overwhelmed.

Morg was immobilized by the praetor’s magic and the soldiers surrounded Kira and Iorskan knocking Kira unconscious at several points. Elleandra kept working her magic and distracting the soldiers with visions of flesh-devouring spirits while the rest of the group continued to eliminate the soldiers.

In the heat of the battle, the half-giant turned on the Balic soldiers and started attacking the praetor. The party was thoroughly confused by this, but gave the half-giant space and watched him carefully. With only one soldier left, Jarvix made obscene thrusting gestures towards him as he tried to use the Way to finish him. Either as a result of fatigue from the long march or extreme overconfidence, Jarvix slipped and fell off the rocks injuring himself instead of his target. However, with their new ally, the Balic forces were finally defeated and the party was able to catch their breath and meet their new ally.

New Allies and New Directions
The half-giant introduced himself as Way-lynn and told Jarvix and the others how he had been in the army of Nibenay and more recently a guard in Altaruk, but now was looking for a way to help stop the sorcerer-kings. He witnessed and survived the attacks of Abalach-Re on Altaruk so knew first hand the magnitude of his self-appointed task. The party realized that they had seen Way-lynn before in their visit to Altaruk before heading to Rafernard’s Forest. Happy to have another strong warrior with them, Iorskan and the others accepted him into their group.

Way-lynn filled in the party about the attacks on Altaruk by Abalach-Re and the deaths of Arisphistaneles, Selonius and Culler. Way-lynn also confirmed that the three sorcerer-kings did fight and kill Abalach-Re between Altaruk and Gulg. Jarvix contacted Birk and learned that the party was wanted by the forces of Gulg, Balic and Nibenay. He also learned that Birk and Arnye had defeated Tethrades and recovered the Crystal of Ebon Flame, but that it was lost in the turmoil following the attacks on Altaruk.

As they rested, they discussed their next move. Their original plan to head towards Tyr now felt like a long march in the wrong direction. Although they wanted information from the Veiled Alliance, there was little else to be gained there. Iorskan told the party about his desire to find his clan’s old stronghold and try and unite the dray outcasts into an army to help fight the sorcerer-kings. The stronghold was located in the Black Spine Mountains between Nibenay and Cromlin.

Feeling that this was one of the only concrete actions they could take to further their goals, the party agreed to help Iorskan. They decided that after a good nights rest they would turn back and head towards Altaruk, but try and avoid the trade fort and any complications with the forces of Balic encamped there. With luck they hoped to reach the relative safety of Rafernard’s Forest.