In the Under-Tyr, the battle with the crimson knights continued to attack Way-lynn, Daqiq, Phyll and Jax. The knights absorbed hit after hit, showing little damage and no sign of stopping. They pressed forward as the party moved back, hoping that the advance would halt. Phyll should have fallen to the attacks, but somehow managed to keep standing. 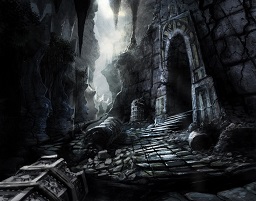 While the rest of the party continued to retreat, Gwyn joined Banoc in exploring the structure, looking for something to help their friends. They found altars with a few lit candles on them and eventually realized that there was a candle for each of the knights. Hoping they could help their friends, the pair started to extinguish candle after candle, and when each was snuffed out, a knight crumbled to the ground.

With the knights defeated, the party regrouped inside the structure and was startled by the arrival of a lone figure, that Gwyn recognized at Romila, a member of the Veiled Alliance. There was initially a good deal of hostility and tension as the party learned that the knights were defending an Alliance safehouse and that they could not be restored by any known methods.

Romila filled in the party on the events leading to the destruction of the Veiled Alliance and the terrible news that the safehouse they were in might be the last of the Veiled Alliance in Tyr. When Romila learned of the groups desire to infiltrate the Golden Tower and deal with Li-Am and Kalid-Ma, a bargain was struck. If the party could help clear out a new safehouse of the Yuan-ti that currently inhabited it, the party would be shown a secret way into the Golden Tower.

With the bargain struck, the party purchased some supplies and items from the Veiled Alliance and headed out…