After attempting to disguise themselves, especially Phyll, the party ventured out onto the streets of Tyr to get a feel for the city and attempt to make contact with the Veiled Alliance. At the Drunken Giant, Banoc and Gwyn attempted to find members of the Alliance, but they were unsuccessful. It appeared that the Alliance in Tyr was driven into hiding following the occupation of the city by Kalid-Ma and were even more suspicious of outsiders than normal.

Gwyn headed to an old ally, Karlen, at his store, Karlen’s Eye. They found him still running the shop and he provided information on the current state of Tyr. He told them of the arrival of Kalid-Ma and his high templar Li-Am from the south and their easy defeat of the city’s guard. With a sorcerer-king once again in control of the city, the old ways had returned – templars and nobles were scheming as even and the brief freedom enjoyed was gone. Kalid-Ma had only just returned from his defeat at Urik in the north, although Karlen mentioned that the sorcerer-king had returned from the south.

Karlen agreed to fence a number of items the party had discovered and use the proceeds to try and obtain useful items and components need for Gwyn to create powerful magic tattoos. With some relief, Banoc gave up the Blade Perilous into Karlen’s care. It would be a few day’s before his contacts returned with the items the party requested. 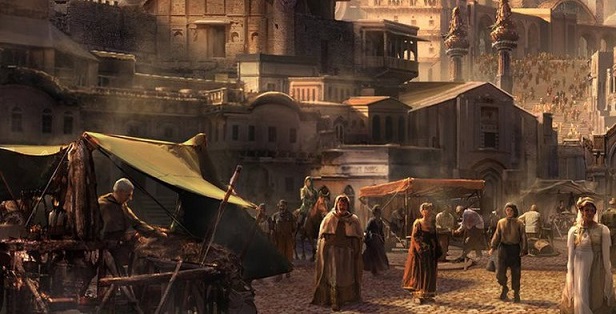 While they roamed the city, Phyll sensed the powerful primal energy of the sorcerer-king’s gardens and suspected that there were many Trees of Life there. Had the rest of the party not intervened, he would have attempt to open the garden to the city, surely earning the wrath of Kalid-Ma. As they made their way back to Free City Tattoo, they encountered a press gang, conscripting citizens into Kalid-Ma’s new army.

The party decided that enough was enough and a fight ensued. The thugs of Kalid-Ma were tough, but not a match for the seasoned adventurers. The combat was over quickly, with Way-lynn, Phyll and Daqiq making a good show of defeating their opponents. The crowd of citizens watch with a mixture of awe and horror. Daqiq, Jax and Phyll freed the prisoners, gave them weapons and told them to earn their freedom.

Leaving before more templars and guards arrived, the party headed to the Warrens and the Under-Tyr in an attempt to find the Alliance and escape pursuit.

I’m going to use Plant Growth to make a guillotine