The Throne Room
The room before the party was immense with massive arches supporting a great domed ceiling painted to resemble the night sky with diamonds, emeralds, and other jewels marking the positions of various stars. The far end of the room was dominated by a step pyramid and a great obsidian throne resting at its peak. Seated in the throne was the mighty sorcerer-king Nibenay. His face set in a grimace of pain as he struggled silently against the cloud of mist and energy that could only be the Zwuun. 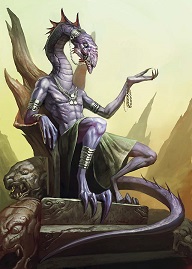 Siemhouk strode forward into the room with the rest following her. As she did, the air in the room swirled about two of the pillars coalescing into vaguely humanoid shapes. Siemhouk quietly stated that the air elementals were some of the defenses Nibenay had created for his throne room. She then moved up closer to her king and entered a trance-like state focusing on her activity to the exclusion of all else. Two different pillars burst into flames which moved of their own accord toward the templar.

Iorskan, Jarvix and Way-lynn moved up and focused their attacks on the right hand air elemental. Gwyn and Elleandra followed them, attacking the same elemental with their magic. Kira turned back into her human form and tossed an orb of energy at the elemental which burst causing the elemental to dissipate.

The fight against the air and fire elementals continued as the party wrestled internally, trying to determine who they should be helping. Iorskan was reveling the the combat, taking particular joy when an elemental was defeated. Gwyn used her magic to briefly transform into a dragon, breathing fire hot enough to even injure the fire elementals. Her allies were simultaneously impressed and concerned about her increasing draconic power.

Siemhouk was completely focused on her task, and the party could only guess at what she was trying to accomplish. Delen, while attempting to avoid being attacked by the elementals, was trying to figure out what Siemhouk was up to. Although exactly what she was doing was still eluding him, Delen did surmise that she was attempting to affect the Zwuun. He trusted the child-templar enough to try and lend his aid to help her complete the ritual sooner.

The tide of battle slowed briefly and Way-lynn and Gwyn, still in the form of a dragon, were far removed from the elementals. Acting on instinct more than rational thought, they both launched attacks at Nibenay himself. Way-lynn’s axe was unable to damage the supernaturally tough hide of the sorcerer-king. Gwyn’s magic, more powerful than ever, was still unable to affect the distracted Nibenay.

Iorskan, Jarvix and Way-lynn were able to defeat the last air elemental, giving the group a brief reprieve from the combat. Jarvix attempted to contact Siemhouk to determine what she was trying to achieve with her ritual. She responded that she was fighting for Nibenay. Seeing no other threats, the party decided to try and defeat Nibenay is his somewhat-vulnerable state. However, their conviction was short-lived and Delen and Elleandra continued to help Siemhouk complete her ritual while the others defended her from additional elementals that appeared.

The Dragon Triumphant
Gwyn moved too close the Zwuun and became affected by the rage of the creature, lashing out at Kira with her magic, and nearly killing the druid. Kira was forced to attack Gwyn, as there appeared little chance that she could break free of the creatures control. Gwyn was pulled away from the Zwuun and knocked unconscious just as Siemhouk completed her ritual. Jarvix used his powers to heal Gwyn and she regained her senses in time to see the results of the ritual.

The ritual Siemhouk was performing calmed the rage of the Zwuun and Nibeany rose to his feet and released a terrifying scream. The days of conflict with the Zwuun were over. Siemhouk moved next to her king and softly spoke to him of the party’s actions over the last few days. Nibenay remained quiet, lost in thought or perhaps using his great power to survey the city.

At last his eyes focused on the party and he tilted his head towards the group, who could do nothing but wait. With a deep, inhuman voice, Nibenay finally spoke…

It would appear that you have some explaining to do…