The High Road
The party left the meeting of the Council of Peace and followed the main road through the city and to the Naggaramakam. It was a wide avenue, grandly decorated for the aborted Starlight Pageant. The many colorful banners and ornate decorations that hung there contrast sharply with the shattered buildings and scattered corpses, giving this place a terrible, macabre appearance.

They reached the Bone Gate, the mighty portal now standing twisted and broken in the wake of the great disaster. The proud stone towers flanking the gate were cracked, splintered, and half-collapsed. The bodies of several templar-wives could be seen partially buried under fallen debris of the gatehouse, but no living guards stood to their entrance into the mysterious Naggaramakam.

The High Road passed through a terraced garden that was once quite splendid. The grounds on both sides of the road had been tilled and planted with colorful, decorative grasses. There were flower boxes lining the walls, and ornate urns, filled with the most delicate of flowers, hanging from crossbars overhead. Sadly, the violent tremors that so recently swept the city left the place in ruin, and the fall of the burning rain poisoned even the plants that survived the first calamity.

As they looked around this area, several shrubs decorated with brilliant blossoms caught the attention of Way-lynn who peer closer. Unlike the other plants in this place that were withered, faded, and dying, those flowers dazzling. In the split second that it took Way-lynn to realize how out of place this plant is, a
burst of prismatic light exploded from the bloom, showering him and his friends is a bust of fire and poison. None were seriously injured and the party moved on.

The High Road ended abruptly at a mighty stone gatehouse with a pair of great, ornate doors that appeared to be fashioned of solid iron. A faint vibration was visible in the air around the doors, marking them as magical. The arcane glyphs, sigils, and runes that covered the doors seem to burn like brilliant sapphires. Despite being cracked and damaged, this structure seamed to be largely intact. Like the outer bone gates, however, there were no signs of guards to keep intruders out of Nibenay’s sanctum. Seeing no obvious way to open the doors or bypass the protections, the party decided to move around the outlying structures.

Exploring the Naggaramakam
The Houses of Commerce were a claustrophobic array of low stone structures. Many of the buildings had collapsed, no doubt killing those inside. The bodies of dozens of Nibenay’s templar-wives littered the streets. While many were obviously killed by falling debris, others appear to have been tom apart by savage creatures. The party found little here except for scores of the undead.

The Houses of Education were neat and orderly rows of low buildings fashioned from smooth slabs of stone. Although the earthquake and the burning rain had destroyed many of them and littered the streets with scores of bodies, it still retained a look of calm symmetry. After dispatching more of the undead, the party discovered a few sets of scrolls that appeared useful.

The Houses of War were squat stone buildings that were all marked with the emblems and devices of war. Some great firestorm, one that must have spared the rest of the city, appeared to have swept through this place, for the walls were scorched and nothing flammable remained. Blackened skeletons, clearly those of countless templar-wives, were strewn about. Paying extra attention to their surroundings, the party was able to discover several items of interest along with more zombies.

Most of the buildings making up the Houses of Law were shattered and collapsed. Most of the streets, narrow to begin with, were choked with fallen stone and the bodies of the templar-wives. Scattered fires burned around the area, marking the last remains of temporary wooden structures or stores of combustible materials. Only undead creatures were found by the party, despite their best efforts. 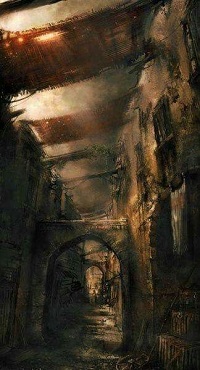 The Houses of Magic were twisted and confusing. Like the other area that lay between the inner and outer walls, it was a maze of narrow, claustrophobic passages, but here the turns and angles were difficult to focus on or to follow with the eye. This was clearly the home of Nibenay’s defilers, for only the effects of magical spells could have created the wild and impossible paths that snaked through this place. Here there were no undead but inside the shell of a half-collapsed building was a whirling pinwheel of light some 3 feet across, hanging quietly in the air. While the object was magnificent and beautiful, there was something darkly disturbing about it. Elleandra, Gwyn and Delen were able to destabilize the magic and a crystal cube fell toward the ground but was caught by Delen. Although it appeared to contain something, none could figure out how to open it and so they moved on.

The Houses of Agriculture were a tightly packed maze of narrow streets running between countless low stone buildings. Most of the structures were still standing, although heavily damaged from the earthquake. Many bodies, all of them Nibenay’s templar-wives, were scattered among buildings and although a few seemed to have been killed by falling debris or the burning rain, but most showed signs of having died very violently at the hands of something terrible. The undead encountered left little doubt as to what that something was.

Outside the Palace
The group returned to the iron doors and found them to be still closed and warded by magic. After a while, Elleandra tried a use her magic to simply fly over the walls. To everyone’s surprise, she encountered no difficulties and safely landed on the other side. Using the Skull of Dorag Thel, she created a number of vines to help her friends climb over the walls and into the courtyard of the Naggaramakam.

They found themselves on a section of road built from slabs of gleaming black obsidian. It lead from the Iron Door to gates of Nibenay’s fortress, passing through what was once a magnificent garden. Convolutions in
earth, no doubt caused by the earthquakes, left the path twisted and difficult to walk upon. To either side there what was once a great park decorated with tall trees, delicate green grasses, and flowering shrubs. The fall of the burning rain left it a mottled and scorched expanse of tortured plants that were either dead or dying. Here and there, they caught glimpses of movement in the withering foliage, but it was impossible to say exactly what kinds of animals might still be alive in this fortress of death. Elleandra spotted a large lake behind the fortress, but everyone agreed to try and enter the building first.

Before them stood the heart of the Naggaramakam, an incredible fortress of epic power. High atop this immense bastion, a huge effigy that was the gaunt skeletal face of the Shadow King himself. The citadel beneath this great bust was built from colossal blocks of stone, etched from top to bottom with twisted carvings of the Shadow King’s countless templar-wives, depicted as if they were locks of their master’s hair.

Their attempts to bypass the door caused them to be filled to rage and briefly attack each other. Once their emotions calmed, they searched and found what appeared to be a key hole. The crystal cube came back to mind, but no amount of effort could open it. Eventually, the simple solution succeeded and when the crystal cube was smashed against the obsidian stones, it broke, revealing and iron key. They key fit perfectly and the palace doors opened.

The Jade Hall
A great hallway with a floor of hexagonal jade tiles opened before the party. On the walls were carved countless twisted, jade-accented figures of death, suffering, and torment that could hardly have been created by anyone but a madman. There were great doors on the northern ends of the room and a pair of lesser apertures in the east and west walls. The entire length of this gigantic room was illuminated by some three dozen dimly glowing jade spheres, hanging from bone chains set in the ceiling, 50 feet above their heads. An inescapable feeling of hatred hung in the air.

The party moved towards one of the smaller doors and as they were about to open it, a great stroke of lightning burst from above and struck the jade tiled floor. The tiles were the lightning hit began to take the shape of two great figures. The jade golems moved to attack. Jarvix and Iorskan were able to use their skills to coordinate the actions of their allies, and the two creatures fell quickly, although the wounds they inflicted were severe.

The party prepared to move into the new room, uncertain of what it might contain…