Cracks of Doom
Suddenly, the evening sky was shattered by a brilliant blue flash. Without warning, a tremendous fork of lightning sprung from the Naggaramakam, Nibenay’s mysterious citadel at the center of the city. It raced across the sky, unleashing a deafening roar of thunder in its wake. With a great explosion, the lightning slammed into the Plain of Smoking Waters south of the city, sending a great shudder through the earth and causing a great cloud of sparkling steam to rise up into the twilight sky.

A great hush fell over the city. After the shock wore off, the average citizen of Nibenay believed that this display was simply part of the Starlight Pageant. In the streets, a cheer gradually built into a great explosion of appreciation.

Suddenly, the ground began to heave and buckle – cracks ripped across the land, forming a great lattice work of fissures, and through these burst clouds of scalding, white steam. Buildings swayed and rocked, wells crackled and shattered, towers collapsed in greet explosions of stone. The cheerful sounds of the Starlight Pageant faded away, the din replaced by screams of agony, torment, and fear.

Unsure of where to go or what to do, they party made their way toward the Temple of Thought. As they did they passed a large number of stone structures about to collapse. A number of helpless, shocked people were about to be crushed to death. Elleandra, Gwyn and Way-lynn tried to save as many as they could, while Delen, Jarvix and Iorskan were more concerned with moving quickly through the streets. Sadly the efforts, while they saved many people, could not save the majority. As the party moved through one street, they notice that many of those crushed by the falling rocks bore an emblem of three dragonflies – the symbol of House Shom.

Huge fissure split the surface of the earth near the party. Several innocent people fell into the chasm, dying horribly in the steaming depths. Others, however, were more fortunate and managed to grab exposed roots or anchored rocks on the sides of the fracture. The party was more quick to react and worked together to try and save as many of the citizens as possible. Many of those saved appeared to be members of one of the noble families.

However, out of the fissures arose a new threat, a small number of corpses began to climb out of the cracks in the earth. Delen could tell at once that these were the bodies of the cities’ dead, who had been entombed beneath the streets since the city was founded. They were easily defeated, but the thought of all the dead buried beneath the city becoming undead was unsettling.

The Burning Rain
At long last, the earth stilled and the trembling aftershocks faded. Still, all was far from quiet in the city. Cries of pain and fear could be heard everywhere, fires burned throughout the city, and geysers of scalding steam roared out of the ground. The sky above Nibenay darkened as the black smoke mingled with white steam to form a sticky gray cloud. Slender traces of blue-white lightning flashed back and forth in the tumbling vapor, producing not thunder, but an eerie crackling sound.

As people begin to gather their wits there was much speculation regarding the nature of the mysterious catastrophe that had befallen Nibenay. The strange cloud of steam continued to grow and darken. After a few minutes, a spitting rain began to fall from the sky and the crowds of people rejoiced. The rain quickly increased in intensity until it became a pounding downpour. Shouts of joy turned into screams of pain once more, for this was not life-giving water, however, but a caustic chemical that burned flesh like acid. 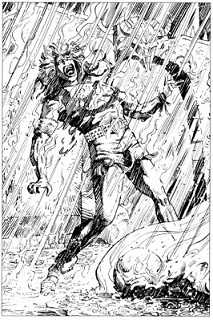 The acid was too much for many people in Nibenay, many of those injured from the other catastrophes were not strong enough and perished in the the burning rain. They party, lead by Delen, ran for cover into the passages beneath the city. The brief directions given by Elleandra and Gwyn to those they passed were not enough and many people perished, including a large group of monks.

Beneath the streets the party was safe from the burning rain but encountered large numbers of the undead. These too were easily defeated, but it was clear the their numbers were growing. Delen estimated the dead outnumbered the living a hundred times over. It was clear that if not checked, the entire city could be overrun.

Delen managed to get the party out of the sewers with only minimal encounters with the undead that continued to rise. They reached the surface as the sun began to rise in the east. They could see more clearly than ever that the city of Nibenay was in ruins. Shattered buildings had strewn debris across the streets, pools of acidic rain were spread everywhere, and the bodies of the dead and wounded littered the city. They could see teams of people clearing away rubble to rescue those trapped beneath, templars using magical powers to heal the injured, and members of the city watch policing the streets, controlling lawlessness and preventing looting.

Council of Peace
Jarvix and the rest of the group were anxious to avoid the templar patrols because of their encounter the previous day in the Hill District. Delen lead them down some back alleys of the district but luck was not with them and they ran into a patrol including a half-dozen half-giants. Their anxiousness turned to fear as they realized the leader of this patrol was a surviving templar from the Hill District. The templar questioned the party about their activities and appeared to be satisfied that they were not trying to cause trouble. Delen was sure that she recognized him from the Hill District but no mention of that was made.

The Templar commanded the party to accompany her to a meeting and gave the impression that refusal would not be accepted. Having no other viable choice, they agreed. Along the way they asked about Kira, but the templar said she did not know her location or if she survived the cataclysm. They arrived at the meeting site and had some time to discuss their situation. Delen advocated leaving the city as quickly as possible, still feeling that they would pay for their attacks on the Templars. Jarvix wanted to stay and find Kira and put an end to the rising tide of undead. Iorskan speculated that if the sorcerer-king was injured, there would never be a better time to strike at him.

While they waited, the party observed the other guests and saw that their Veiled Alliance contact Johrd. In the few minutes before the meeting started Johrd told Jarvix that the Veiled Alliance has been unable to contact their ally, the Zwuun, and their attempts to scry into the Naggaramakam have been utterly futile. All those you have made such attempts have been filled with rage, and they fear that the rage may be coming from the Zwuun. Johrd excused himself and the meeting began in earnest.

The templar-wife spoke first, “I am Leaza, templar-wife of Nibenay. To the best of my knowledge, I am the highest ranking templar to have survived the cataclysm. I charge you to heed my words and obey them as you would Nibenay’s own.” With that, Leaza yielded to Johrd. "I am Johrd of the Veiled Alliance, he says. Leaza and I have agreed to set aside our differences and join forces to salvage what we can from this terrible calamity.”

Other members stepped forward and introduced themselves as well and shared information about the recent events. Temmnya Shom, representing the surviving merchants, informed everyone that there is little edible food or drinkable water left in the city. She had sent runners to divert caravans to bring emergency supplies to Nibenay.

A human male stepped forward and introduced himself as Pahleek, the representative of the School of Augurs. The Augurs have discovered that all attempts to use the Way explore the sorcerer-king’s citadel have resulted in failure. Some terrible force seemed to have infused the Naggaramakam, creating an aura of hatred and anger so great that nothing can pierce it. The effect that this might have on those within the citadel is unknown.

A man introduced himself as Kayardi, assistant Master of the Monks of the Exalted Path. He claimed to have made a careful study of the stars and recent omens. Taken individually, these portents showed nothing unusual, but when examined together, however, they were more foreboding. Kayardi insisted that all the might of the templars, the magic of the Veiled Alliance, and the wisdom of his people will not save Nibenay. That, he claimed, that a child must be the one to save the city.

A woman spoke last and introduced herself as Ahli Kiaka, head of House Kiaka. She informed the council that the vast majority of Nibenay’s most important nobles were called to meet with the king just before the disaster struck. Since no word has come from Nibenay’s citadel, she has assumed that she may be the highest ranking noble left alive in the city. “I believe that Nibenay planned to destroy the Veiled Alliance by unleashing a tremendous magical assault on the mysterious Zwuun. He had long believed that the information this creature supplied to the Alliance was a great threat to him. With the Zwuun gone, he had always said, the Alliance would crumble.”

The party described their encounters and after a robust discussion, it was generally agreed upon that the party would head to the Naggramakam and determine the fate of the sorcerer-king and hopefully stop the powerful rage that is animating the dead.