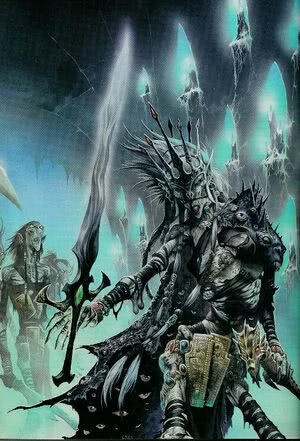 The party passed through Trinth’s portal and found themselves in a chamber looking at Trinth and her guards. The queen was an impressive figure, standing over 9 feet tall. She was dressed in clothing and armor that could purchase a city on Athas. She held a scepter with a pulsing ruby in one hand and a large silver greatsword in the other.

I have decided to allow you a rare honor – to become my Adlishar, the first of many who will serve me. Kneel before me and pledge your undying fidelity me.

The party debated the lich-queen’s offer, but were split in their opinions about the best decision. They questioned Trinth and believed that she was not completely honest about her intentions. Birk, Phyll, Daqiq and Jax felt allying with Trinth was the better option, as the destruction of the sorcerer-kings would be for the benefit of all Athas. Gwyn, Way-lynn, Banoc and Iorskan felt that exchanging one tyrrant for another was not an acceptable option.

The situation changed when Birk knelt and Trinth used her scepter to magically compell him to follow her orders. This was unacceptable to Phyll, Daqiq and Jax who decided to leave, however, Trinth’s true definition of freedom was death and a battle ensued. Banoc, who was severely injured from the arena fights dropped to a lightning blast from Trinth. An attempt was made to push past the guards and Trinth, but the party was cut off.

Gwyn used the last of her magic to wish the party back to the gateway they used to enter the Astral Sea. Once again, her focus was off and they all arrived in a remote and empty region of the Astral Sea. They stabilized Banoc and rested, recovering their strength. For lack of any better option, they followed Way-lynn’s lead and started moving through the Astral Sea. After over a day of travel, they happened across an emeral green portal. Entering the portal, the party found themselves in a dark forest growing from swampy, brackish water. Phyll believed that they were now all in the outer plane known as the Beastlands.