Second Chances
Perplexed by their lack of progress, the party decided to head back up to further investigate the pit. Before making the decision on whether to enter the pit or not, the party threw one of the gith corpses into the pit, to see what would happen. Elleandra and Kira noticed that the shadows appeared to move a bit which increased their wariness. Next Morg tossed a torch into the pit doing his best to land near the corpse. Although his aim was a little off, he was close and the shadows recoiled from the light.

Kira decided that the risk was worth the possibility of discovering any secrets in the pit and changed form into a large raven. She began to slowly descend into the pit and saw that the metal inlaid into the walls was arranged in distinct patterns. Although she was not familiar with it, there were some similarities to the various protection runes that she had seen Evan use in his rituals. As she neared the bottom, about 20 feet up, she spied about a half dozen large, horned and scaled creatures that the party had described to her as tembo. These beasts looked well fed and were watching her intently.

Not willing to risk a confrontation with so many powerful creatures, she flew back up to the rest of her companions and reported in. The group decided that they should not risk a fight at this time and returned to exploring the underground structure.

The decided to start at the top and take another look at the murals in the entry way. Jarvix examined the walls looking for any signs of illusions or other concealed features in the images of the Avangion. Li-Am and Iorskan also examined the murals and estimated that they were hundreds of years old. There was nothing else discovered in the room.

There was much speculation regarding the presence of Tembo, traditionally beasts of the sorcerer-kings, the well-equipped Gith with coins from Raam and the nature of Rafernard, a being who appeared too good to be true. While they continued to be suspicious, they felt there wast little else to do except explore while they waited for dawn and their meeting with Rafernard. The party went down to try their luck at the warded doors on the lowest level.

At the wooden door, Li-Am was able to finally disable the traps and working together, Morg and Iorskan pried open the door. The large room beyond with filled with numerous haggard looking individuals who appeared equally surprised to see the party at the door. After much commotion, the story became clear. These were about two dozen individuals who had followed the pilgrims to this forest over the last month or so. They had not been compelled to do so, but followed for their own reasons. All of these people had been attacked and subdued by gith or some unknown force and found themselves here in a dungeon. Some of the people who had been in here previously had been taken away and not returned.

Among the prisoners were several Dray, one of whom Iorskan recognized – a female named Heskana. She claimed to have information for him about their clan, but that now was not the time for the story. She and about half of the others were willing to join with the party and stop Rafernard, who they believed was not truly what it claimed. The others were demoralized by their captivity and only desired to escape. Elleandra was able to convince them that staying and fighting was the only hope they had of being free. The prisoners were equipped with the gear from the slain Gith.

While Morg, Jarvix and Kira saw to the needs of the prisoners, Li-Am Iorskan and Elleandra attempted to break through the other door. Although similar to the wooden door, this metal door was more difficult to break into and they were unsuccessful in bypassing the physical protection placed upon it. Elleandra attempted to use her powers to slip past via the Lands Within the Wind.

Moving through the metal door felt cold and unnatural to her but she was successful. The room on the other side was magically illuminated and filled wall to wall with chests, urns and bags all overflowing with golden coins. Many tens of thousands of coins by her estimate were in the room and they had all manner of markings on them from many different city-states. She gathered a small pouch of them and after a short rest moved back across the door too rejoin the party.

Although the party was eager to gain access to the treasure, they were unsuccessful at breaking into the room. Eventually they decided to head up to the forest and wait for Rafernard. They positioned themselves around the perimeter of the plaza with the prisoners and waited for dawn. Jarvix sent another message to Arisphistaneles informing him of their suspicions and discoveries.

Rafernard’s Last Spell
At last dawn broke over the lush forest and Rafernard appeared atop the intertwined tower and tree. With her appearance the party and their allies felt an overwhelming power calling them to attention. They were not alone as out of the forest hundreds of pilgrims arrived at the plaza. Morg, Elleandra and Iorskan became entranced and could do nothing except stand as zombie-like automatons.

When the push of the pilgrims stops, Rafernard reveled as the center of attention. She pulled forth a glowing human skull with gem-packed eyes and vines wrapped about it. For a moment Rafernard existed as the great avangion that the party had seen before. Then she changed.

The illusions fell away revealing a tall regal, evil-looking woman in ornate robes. “Who am I?” the woman called out. “Sing my name before you give me your lives!”. The pilgrims began to sway in time as if to some unheard song. They then began to chant, slowly at first then faster and louder. 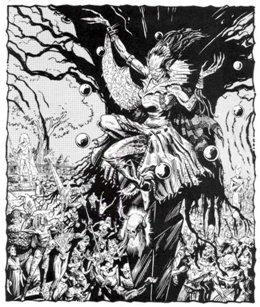 The party realized the terrible truth – before them was the sorcerer-queen of Raam, Abalach-Re!

Abalach-Re lifted one claw-like hand and utter twisted words of dragon magic. In an instant the Tree of Life turned to ash and the stone tower transformed into a pillar of stone, carved to resembled giant human skulls. As she emphasized each terrible syllable, seven obsidian spheres rose out of the ground and began to twirl about. Uttering phrases that were actually painful for the party to hear she turned to look at the few who have been able to ignore her summons. There was a smug look of triumph on her draconic features. Then crackling black energy issued from her hands, slamming into the oblivious pilgrims and bathing Abalach-Re in energy.

Those that were free of her compulsion moved quickly, attempting to prevent her spell from being completed. Morg’s Mul heritage allowed him to break free of the charm and he charged forth and swung his axe at the nearest obsidian orb striking true but not shattering it. Abalach-Re summoned that orb to her and consumed it, her mouth opening unnaturally wide to swallow it in a single gulp. As she did her form grew and became more draconic.

Kira and Li-Am attacked the pilgrims hoping to slay them and perhaps prevent Abalach-Re from drawing their energy for her foul magic. Jarvix used his talents with the Way to try at attack Abalach-Re from a distance, but her defenses simply deflected the attack towards the pilgrims.

The battle continued with Iorskan and Elleandra breaking free from the terrible magic, but everyone’s life was being drained by the dragon magic. Kira, already weakened from her restoration of the land was knocked unconscious and only Iorskan’s healing was able to keep her alive.

Although the party fought well Abalach-Re was able to stay one-step ahead of them, consuming more orbs and becoming more draconic. Just as the last of the pilgrims was slain, she consumed the final orb and with a roar of triumph her change was complete – she was now a dragon-queen. 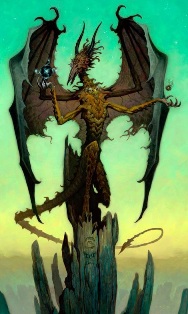 Morg hurled the Heartwood Spear at her and he succeeded in wounding her and drawing her attention. She teleported down from the tower of skulls and began to rip him apart with her claws. None of the attacks of the party were able to do more than minor wounds to her.

Li-Am saw through the battle field carnage the skull that had been held by Abalach-Re but was dropped when her transformation was complete. He raced towards in and picked it up off the ground. Transfixed by it for a moment, he then cried out to his companions they they must flee or they would perish. Realizing the truth of his words, the party converged on Li-Am and Elleandra used her orb to transport them all to the ruins of Kalidnay.