Unquiet Night
The party decided to rest in the trees of Rafernard’s Forest and discuss what they should do next. Although the forest was a miracle they remained suspicious of the situation which appeared too good to be true. As they rested they decided to keep a watch and Morg, Li-Am and Iorskan volunteered for the duty. The party decided that they would explore the tower as soon as they were rested, curious about what secrets it might hold.

The night passed without incident until just after midnight when the party was waking up and preparing to head towards the tower. With barely any warning, a group of Gith emerged from the forest, surrounding the party wielding spears and clad with insect shell armor. They Gith appeared to be much hardier than those that had been encountered previously and the quality of the equipment was visibly better than was typical.

The Gith engaged the party at range hurling many spears at the group, a tactic that proved effective for a short time while the party grouped up to make a defense. The Gith used their a mastery of the Way to augment their attacks and caused many injuries to the party. Iorskan was able to keep his allies alive and the Gith were eventually defeated with only two survivors feeling into the woods.

The fallen Gith were examined and found to have nothing particularly remarkable although they were carrying coins bearing the marking of the city-state of Raam. After treating their wounds, the party decided to continue with their plan and investigate the tower at the center of the forest.

The Underground
The party approached the tower with even more caution after their attack by the Gith but found it unguarded. Along the way they passed several small groups of pilgrims who still had the vacant expression of happiness on their faces. As before the pilgrims were unresponsive to the presence or actions of the party.

At the tower, the party found a trap door leading down into the earth and stairs winding upwards. Feeling that there was little that could be in the upper ruins of the tower, they decided to go down. When the trap door was opened, they saw stairs made of gray granite winding downward. The air was cool and comfortable as they made their way down the spiraling staircase, although there was a feeling of ancient power that could be felt by all.

The stairs descended the only sounds that the party heard were the echoing of their footfalls. After they had gone about 20 feet down into the earth, they reached a landing which was lit by a soft, magical light. The stairs continued down, but the party stepped off of them to explore the small room. Without the echoing of their steps, some slight background noise of unknown nature or origin was heard.

The small landing contained no furniture or objects, but each of the four wall was decorated with murals showing an illuminated, winged being restoring the earth to a green paradise. The being had a remarkable similarity to Rafernard. The party quickly searched the room and found nothing else.

Seeing no other exits, the party descended deeper into the earth. The granite stairs continued to wind down about another 20 feet until reaching a second landing. The stairs continued down from this level as well.

The room was roughly twice the size of the previous level and contained a large number of chairs and tables of fine quality. The walls were decorated with similar murals as the room above, but appeared to be more faded. The entire room was brightly illuminated with magical light. The chill in the air was deeper than at the previous level and the indistinct noises were louder.

A thorough search of the room revealed nothing out of the ordinary and although the party felt they were missing something, they were unable to determine what that might be.

Pitfalls and Perils
After following the stairs downwards another 20 feet the party reached a small landing with two short passages, one to the north and one to the east. The stairs continued further into the deep earth.

The party followed the northern passage a short way before it opened onto a huge pit about 30 feet across and about 80 feet wide, with the party on a small ledge in the center of the long side. In their torch light, they guessed that the pit was about 70 feet deep, although they couldn’t make out the bottom clearly. In the shadows at the bottom of the pit they could see numerous skeletons and what appeared to be discarded gear. There was something imbedded in the walls of the pit that reflected light like metal, but none could get a close look at it. There was no obvious way to investigate the pit, the party moved to try the other passageway. 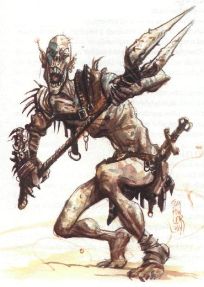 The eastern passage quickly reached a wooden door bound in iron. Trying the door the party found it to be unlocked and the proceeded in to the room. Rounding a corner of the room the party came into what was apparently the barracks of a large force of Gith. Over twenty armed Gith were present in the room and immediately took to arms when the party came into view.

The battle was quick and the close quarters favored the party with Jarvix and Elleandra able to affect large numbers. Kira, who shifted form several times attacking with her magic and claws, was able to bring about the death of many Gith as well. Only when Gith reinforcements came from behind the party was there a real threat, but this was quickly overcome as well.

Beds, chests and table suggested the room could accommodate over 40 gith. The corpses and room were searched turning up more ceramic coins from Raam, but nothing else of any value. The party discovered nothing else in the room. The heroes took a few minutes to recover their strength and tend to their wounds.

Dead Ends
Returning to the granite stairs once again, the party moved downwards. This time the stairs descended some 40 feet before reaching the bottom. At this level there were doors on the west and east side of the stairs. The western doors were 10 feet wide and made of stone reinforced with metal banding and the eastern door was made of iron.

The party discovered that both doors were locked and trapped with Iorskan and Morg receiving electrical shocks from arcane wards placed upon them. The party was unable to overcome the locks and wards by any means they could think of. A feeling of frustration began to build as they felt something and been missed but they didn’t have a clear idea what to attempt next.