Arrival at Altaruk
The trade fortress of Altaruk loomed in front of the party. With walls about 15ft high and 10ft thick, it was an impressive sight. Each corner was capped with a 20ft high tower and guards with spears could be seen patrolling the parapets. Roughly every third guard was watching the interior of the fort, instilling a sense of safety uncommon in the harsh land. They party approached and could see the south gate standing open in the early afternoon. The huge doors, fashioned of granite and metal, had exteriors carved with reliefs of merchants doing business.

Outside the fortress a vast throng of pilgrims could be seen milling about at the walls, sitting on the ground, and staring in to space. The assembly is eerily quiet; the only noises come from the fort’s normal occupants as they go about their business. It seemed as if the citizens were determined to ignore the pilgrim hordes.

At the front gate there was a short wait before they reached the guards. Morg took the opportunity to inspect the pilgrims a little more closely, but he learned little more than they already knew. The pilgrims here were as unresponsive as those they passed on the road and none knew what to make of them.

When their turn came, the guards asked basic questions and took payment for entry into the fort. Although Morg had been an arena star here, the guards did not recognize him or give him any special consideration. Perhaps it was the many months that had passed since he was last here, or perhaps it was the eye patch he now wore. As the party moved through, the guards consulted a crystal and asked that Elleandra and Li-Am demonstrate their magical skill. As they did so, the guards payed close attention to the thorny bushes planted along the wall. The guards were satisfied and allowed the two to enter.

News, Rumors and Shopping
Inside the walls of the fort, Altaruk could be seen to be bustling, prosperous trading village. The party decided that the best places for information would be the inn, The Four Bits, the market area and the keep and home of Arisphistaneles the governor of the fort and Veiled Alliance member.

The keep guards refused to allow them entry as the captain was occupied at the moment and could not be disturbed. As they chatted with the guards the party learned that the thorny bushes were part of a green test to ensure that no defilers were allowed inside the fort. Altaruk had begun openly supporting the Veiled Alliance and arcane spellcasters were now welcome as long as they were not defilers. After some some time, Selonius emerged from the keep and greeted Morg. He arranged for the party to have dinner with Arisphistaneles later in the evening, giving the party more time to explore the fort.

As they group wandered through Trader’s Row, they stopped to do some shopping and gather more information. Kira purchased clothing more fitting for the desert environment and she and Elleandra both obtained clothing suitable for dinner. Jarvix acquired components for his rituals and looked over the selection of books but found nothing of interest much to the dismay of the elf proprietor. Morg commissioned a high quality traveling cloak and metal clasp, paying extra for fine details and for it to be completed quickly. 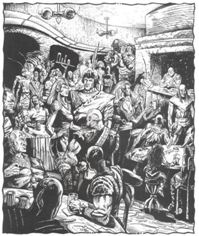 After shopping the party headed to The Four Bits to get rooms and to clean up before dinner. They found the common room inn to be crowded with all manner of races and occupations. The cool room was abuzz with conversation and merriment, with plentiful food and drink. Without too much difficulty the innkeeper, Gelrade, was located and three rooms were reserved with Kira and Elleandra, Jarvix and Iorskan and Morg and Li-Am sharing. The party cleaned up and did their best to be presentable and then met down in the common room.

When they returned to the common room it was a little less crowded and they found a table. Jarvix noticed that the elf who was selling books in the market place was now here and appeared to be making numerous advances on the three half-elf barmaids. Hoping to spare the bar maids any further trouble, the group got his attention and learned that he was a bard named Twon. After a few drinks he told them the Nomad’s Tale and when they appeared interested he offered to tell them another tale – a legend of the Valley of Dust and Fire.

Afterwards Twon announced that he was in possession of the Journal of Galek Sunstrider. After much negotiation, they agreed on a price and Jarvix took possession of the journal. Following the transaction Morg told his tale, which he called the tale of the Knight of Kemalok. Twon listened politely although it was obvious that he wasn’t focused on the story. After he was finished Morg sensed that his Axe was displeased.

Although they would be a little early, the party decided to head to the keep and their dinner appointment with Arisphistaneles. Along they way they came within earshot of the south gate and there appeared to be a disturbance. They were shocked to find that Tethrades was there and demanding entrance to the fort. The gate guards had blocked him from entering after he had refused to take the green test. Morg offered his assistance, as he was eager for revenge on the defiler and former praetor of Balic, but the guards refused his help and ordered him back.

In the end Tethrades left with his guards and party was torn between following him and keeping with dinner. Morg initially lobbied for following the defiler while Kira and Jarvix wanted to keep their dinner plans, as they thought the governor would be a useful source of information. Eventually it was decided that the dinner plans would stand and the group headed to the keep.

Dinner with Arisphistaneles
The party was let in to the home of Arisphistaneles and found it to be richly appointed, tastefully decorated and achieving a fine balance between opulence and functionality. The party was greeted by domestic help (servants, not slaves) and provided with water and face cloths to clean and refresh themselves. The party asked to see the governor as quickly as possible and they were shown to a spacious dining room where Arisphistaneles greeted them.

They discussed a variety of topics as they ate and drank. The encounter at the gates with Tethrades did not appear to concern Arisphistaneles too much as the fort was accustomed to dealing with defilers. Still the extend of Tethrades’ dealings did give him pause and he promised to look into it more. While they discussed the defiler and his possible involvement with the pilgrims they were served cool wine and dates.

The numerous pilgrims outside the fort was a topic of conversation that carried on through a lavish dinner of fine Asticles wine, rare faro fruit, and mouth-watering chathrang steaks. He confirmed that the pilgrims had been showing up for about a month or so and that they are completely unresponsive to any outside stimuli. He suspects that they are caught up in a fervor toward some unknown goal or they are being controlled somehow. He was able to get a single word – Rafernard – out of one of them, but has been unable to determine who or what that is.

Arisphistaneles said that he had never been able to follow the pilgrims as they head to the northeast, but he sent a ranger and Roc rider by the name of Culler after them. She was now missing and Airisphistaneles was beginning to worry about her fate. The party decided that the best course of action would be to follow the pilgrims and hope that they lead them to answers and possibly the missing ranger.

As the meal concluded with large helpings of bulis berry, Arisphistaneles changed the topic and wanted to learn about the party’s adventures. He was saddened to learn of the death of Vinara and Gwyn and was very interested in Kira and Elleandra, as they had experiences and knowledge of places he did not know existed.

Eventually the evening came to and end and the party returned back to the Four Bits for much needed rest before their new journey the following day.

Midnight Intruders
Kira’s sleep was interrupted and she woke with a start and she quickly realized that she and Elleandra were not alone in their room – three large half-giants were present and rummaging through her belongings. Kira shifted form and bit into the nearest thief with jaws of ice. Elleandra woke and quickly charmed them into attacking each other for a moment.

The commotion woke their friends who came to investigate with Li-Am and Morg the first to arrive and Iorskan and Jarvix taking a bit longer to wake up and realize the situation. The half-giants focused their attacks on Elleandra knocking her unconscious. Li-Am killed one of the half-giants with his conjured scourge and Kira was able to knock a second one out. The third managed to grab something from the unconscious Elleandra and then flung himself into the shadows and disappeared.

Iorskan tended to Elleandra’s wounds and the Altaruk guards, along with several guests at the inn, showed up moments later attempting to determine what was going on. Elleandra quickly realized that the half-giant had stolen the Crystal of Ebon Flame from her…

Interesting to see how our inactions will affect us.

I’m really glad that we got that book though, what an awesome prop!

My Wooshwagon will be very useful for the long trip ahead.