Ruins of Kalidnay
After the nausea faded, the party found themselves in the outskirts of Kalidnay on Athas. The familiar bright sun and oppressive heat was a welcome change from the Gray. Exhausted from their ordeals, the party took rested in one of the more intact buildings. They discovered that all of the metal they had brought from the Gray had turned to wood, making it mostly worthless. Their sleep was fitful and each shared their experiences with each other in the morning…

Although reluctant to spend more time in the ruins, they decided to head towards the Ziggurat and see what had happened to the laboratory used by Tethrades. Along the way they noticed some of the silvery-red crystals that they had seen before in the caverns beneath Kemalok. The occurrences of the crystals increased as the party approached the Ziggurat.

At the Ziggurat they found that the equipment had been destroyed and they layers of sand and dust over the remains suggested that more time time had passed on Athas then had passed for them in the Gray. Morg estimated that about 6 weeks had passed here for the 1 week that they had experienced. Morg took a few of the canisters that remained avoiding the red crystals and finding many of the dead shaqat beetles.

The party debated on how to get to Altaruk, which they agreed was the best place to go for supplies and information Although the route via Fort Melidor was more direct, there was concerns about how the party treated Dalem Shom and what kind of reception they might receive. The ruins of Celik provided another option, but the path was less direct and the current state of Celik was unknown. Eventually it was decided to head to the Lost Oasis then Fort Melidor before making the long journey to Altaruk. 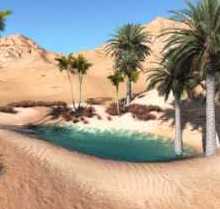 After a day of travel from Kalidnay through salt flats the party arrived at the Lost Oasis. The mud pots, geysers and sparse trees were a welcome relief from the barren salt flats. At the Oasis they were able to find food and water to help provide for the journey to Fort Melidor.

At the Oasis, they encountered a man who introduced himself as Lionus. Jarvix remembered a story of a Veiled Alliance member who journeyed from Tyr to Balic and then vanished, although he was uncertain if this was the same individual. Lionus appeared to be somewhat excitable and incoherent, but Li-Am suspected him of having all manner of deviancy.

In their conversations with Lionus, the party learned that he was the only inhabitant of the Oasis although it was occasionally visited by someone called Durwadala. They also discovered that he had strong emotions regarding the ruins of Kalidnay and had claimed to recover several “trade documents”. Upon closer inspection, Li-Am was able to decipher part of the documents before Lionus decided he needed to leave. The documents were notes apparently from the sorcerer-king Kalid-Ma himself.

The rest of the evening and night was uneventful although the strange sounds of the Oasis were disconcerting. They party moved out in the early morning and made the day-long march to Fort Melidor without encountering any trouble.

Fort Melidor
Their arrival at Fort Melidor was anything but eventful as the little outpost of House Shom appeared even more sleepy than on their previous visit. The party was allowed to enter without any trouble and the party decided to split up. Elleandra and Iorskan headed to find supplies for the long trip to Altaruk while the rest headed to the Broken Tankard, the only bar in the fort, to try and gather information.

At the House Shom warehouses, negotiated for a weeks worth of food, water and other survival goods for each member of their party – sufficient to supplement their existing supplies and get them to Altaruk. Although the cost was quite a bit higher than normal, the remote location and desperate need of the party left little room for negotiations. Elleandra paid for the goods with some of the gems recovered from the wreckage of the Shadow Engine.

Morg and Li-Am struck up a conversation with a guard named Ridorn who was in the Broken Tankard. After buying him a drink, they learned that he was rather bored and disgruntled at the lack of activity in the Fort. There appeared to be little trade traffic to the fort recently and everyone was concerned about the effect that would have on House Shom.

An elven bard named Jarvi was in such a state of depression that he had no stories to share with Kira. The Shom family members at the fort were no longer interested in social events and spent all their time within the walls of their garden and had not entertained for several weeks.

The bartender was a scarred female mul named Thera who was a former gladiator. She had little information to offer the party as the fort appeared to be waiting for something to happen. The loss of the caravan the the party was a part of undoubtedly hurt the fortunes of House Shom and as a consequence the fort has had little activity.

The party was able to secure food and lodging for the night and took turns on watch, although nothing disturbed their rest.

Altaruk
Shortly before dawn the party headed out for a long journey to Altaruk. With the heavily armored companions and the absence of Gwyn, the party moved more slowly than they were accustomed to, but still made good time. They were able to forage for supplemental food and water along the way and Morg and Kira were particularly successful.

The party traveled around the south side of the Giant’s Ribs Mountains and into the sandy wastes until after three days they found the remains of the trade road. Turning eastward they followed the road for two days through stony barrens and rocky badlands until the expanse of the Great Alluvial Sand Wastes stretched before them. Three days of following the remains of the road through sandy wastes, that were mercifully free of large dunes, brought them to the trade road between Tyr and Altaruk.

They party turned southeast and followed the road. Along the way they came across several groups of pilgrims who appeared oblivious to their surroundings and ignored all attempts and communication. Their tattered clothes and sunburned skin made it obvious they were not taking care of themselves as any normal traveler would. The party overtook a caravan from Tyr and inquired about the pilgrims and learned that they had starting appearing about a month ago from all parts of the Tyr region and they were generally headed in the direction of Altaruk.

After two more days of travel, the party reached Altaruk and saw a huge number of pilgrims congregating outside the high walls. Concerned about the state of things, Jarvix sent a message using the Way to the Veiled Alliance in Tyr, hoping that they had more information…