Retreat to Kalidnay
When the nausea passed, the party found themselves in the ruins of Kalidnay, where they were several weeks earlier. Relieved to have escaped from certain death at the hands of the transformed Abalach-Re, they were nonetheless discouraged about their failure to stop her and their need to retreat. The party made camp in a nearby building to try and determine their next course of action.

Jarvix sent out several messages to his contacts in the Veiled Alliance to inform them of the new threat that Abalach-Re presented. Arisphistaneles in Altaruk, Mathias in Tyr, Lyanius in Kled were all contacted by Jarvix and thanked him for the warning, although they were barely able to comprehend the danger.

Iorskan had a long private conversation with one of the survivors from the battle at Rafernard’s Forest who was brought along with them when they fled. He appeared to know the female Dray named Heskan, but did not divulge the subject of his conversations to any of the other party members.

After much discussion, the party decided to travel to the city-state of Balic via Celik, hoping to avoid any further encounters with Abalach-Re and follow-up on Tethrades. They also hoped that they could perhaps find passage to the final Orb over the Sea of Silt. Jarvix made contact with Maserak, a Veiled Alliance member in Balic, to let him know of their impending arrival.

At the end of their rest Jarvix contacted Arisphistaneles again to find out any news regarding Abalach-Re. He was horrified to learn that the sorcerer-queen had attacked the trade fort and amazed to learn that she had been repelled. There was little detail about the encounter but casualties sounded severe. 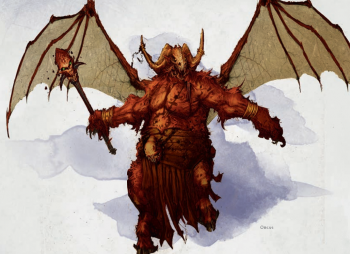 After finishing their rest, the party headed southeast out of Kalidnay’s ruins towards the settlement of Celik. As they were approaching the edge of the ruins, the unnatural quiet was disturbed and the party came face to face with a horde of demonic creatures lead by a large being which bore a striking resemblance to the fiend that was summoned by Thakok-An. A brief parlay was had and the demon demanded Morg for its mistress – Marisol.

Without hesitation, the party came to the defense of Morg and a brief but intense battle ensued. Although the party suffered some injuries, they emerged relatively unscathed. Kira once again focused her attacks on the larger demon and was able to cripple it early in the fight. As they recovered from the fight there was much speculation on the current state of affairs in Shadow Kalidnay and how Marisol was able to exert her influence over these foul creatures. However, there were no answers.

Journey to Balic
The journey from Kalidnay to Celik took the adventurers six days to complete and mercifully was uneventful. The settlement of Celik lived up to its reputation as a gathering of slaves, outcasts and criminals seeking refuge and opportunity. The party paid an exorbitant entry fee and managed to find reasonably safe accommodations.

Li-Am, Morg and Kira spent their time attempting to learn any information about the current events while the others gathered supplies for the remainder of their trip to Balic. The supplies were of dubious quality and overpriced but Elleandra was able to charm the merchants into a better deal.

The talk in Celik was mostly about dragons – the Dragon was believed to be in the north on its journey to collect its levy from the various city-states. There were many rumors about another dragon in the west going on a rampage destroying the land and many small settlements. There was also some talk about rampaging giants from Silt Sea and the Legionnaires of Balic continuing to search for something – although none knew what they were searching for.

Thankful for avoiding trouble in the settlement, the group left Celik behind and made the 10 day trip to Balic without incident. A day outside of the city-state the land turned to verdant farmlands of grain fields, vineyards and olive groves – a sharp contrast to Tyr. As the party moved along the Road of Legions they approached the Great Gate, the western entrance to the city.