Ruins of Waverly
The crew of the Dusty Breeze began to repair the vessel, moving a quickly as possible for the presence of the large Dray force on the island. Although the ship had supplies to make repairs, they would not be able to make more repairs should the need arise. The party decided to venture into the island to gather more supplies and explore a bit while the crew was working.

The party headed out in a but quickly realized that they had very little idea where they should go. Elleandra used her magic to fly upwards and get a better idea of the layout of the island. She spent only a short time in the air to reduce the risk of being seen, but was able to see several promising areas that might provide supplies. They decided to head towards the southern end of the island, where there appeared to be more plant life.

After many hours moving across the island and searching Kira discovered a small stream of foul water emerging from behind a large pile of rubble. The rubble was easily cleared and a passageway was revealed leading under the ruins of the city. The sewer captured the interest of the party and they proceeded in after Jarvix used the Way to check in with Captain Daclimitus on the repair progress.

After an hour of so of searching, the encountered a group of Dray in a chamber. Although the Dray were surprised to see the adventurers, they were not immediately hostile and the two groups had a guarded conversation. Iorskan became the spokesperson for the adventurers as the leader of the Dray would not condescend to talk with the other party members.

The party learned that the dray were on a mission for their god, Dregoth, although they would not disclose any specifics to the party. They did appear to almost be expecting Iorskan and suggested that they present themselves to the dray encampment to be judged worthy. There were subtle intonations of other, darker, events taking place, but the party was unable to get more information, as they had not been deemed worthy yet.

Fearful that if they left the dray alone that the party’s presence would be reported to the main dray encampment the party decided to take action. The dray put up a good fight, but proved to be no match for the adventurers. Kira and Li-Am prevented the leader from casting any spells and finished off the majority of the soldiers. Morg took several serious injuries but Iorskan was able to keep him alive.

Lost Lore
After recovering from the fight, the party spent several more hours in the sewers attempting to discover what the dray were up to. Their investigations were yielding no results and they were just about to give up when a faint glow caught their attention. Following the light, they came upon a large room off of the main sewer line occupied by a half-dozen spectral figures. 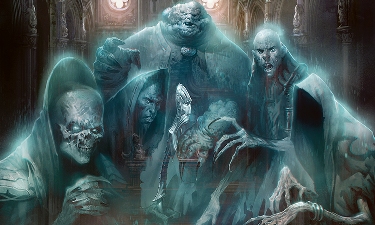 Expecting trouble, the party was relieved to find that the spirits were not immediately hostile to the group. Elleandra spoke with the spirits and discovered that they had perished almost two thousand years ago when Uyness, the ruler of the city, betrayed them and left the city in ruins.

Elleandra was able to convince the spirits that she and the rest of the party were on a mission to restore the world. The spirits offered the party their choice of either riches or knowledge. Although some were tempted by the riches, they eventually decided that the knowledge would be the best choice. The spirits lead them through twisting passages eventually arriving at an apparent dead-end. Iorskan and Li-Am were able to uncover a hidden door which opened into a large room filled with books and scrolls.

When the party tried to enter the room they found that Li-Am and Elleandra were unable to enter the library. The ghosts explained that the library was warded against arcane magic users. Those two waited while the others searched the library for any useful information. The majority of the writings were historical records of Waverly and it appeared that Uyness of Waverly might have been another named used by Abalach-Re. Other records appeared to have more information related to the Cleansing Wars but the party did not spend time to review everything they found. While the literate adventurers were scouring the books, Morg noticed that there were a large number of metal candlesticks, scroll cases and other paraphernalia and helped himself to as much as he could carry.

After gathering all that they could, the party started retracing their steps through the sewers and back to the landing point of the Dusty Breeze. The day had been long and the party pushed themselves hard to reach the landing as quickly as possible. When they reached the ship, they found it destroyed and the crew missing. It was not difficult to put together what had happened as there were numerous Dray footprints near the wreckage. Jarvix risked attempting to contact the captain with the Way and was relieved that he was still alive. Daclimitus said that he and the crew had indeed been captured and were being help and the Dray encampment.

The Dray Encampment
The party took some time to recover their strength and formulate a plan for rescuing the crew and getting them all off the island. Once they had agreed, the party began marching west towards the Dray encampment, with Kira shape-shifted as a songbird and scouting ahead. They encountered nothing but a few wild animals on their journey until they were near to the camp and a patrol spotted them.

Iorskan demanded to see the camp commander and pretended to be delivering the rest of the party to the camp commander. Much to the surprise of the party, the ruse appeared to work and they were allowed entry into the camp. Li-Am and Iorskan were escorted to a comfortable tent while the rest were hauled into a pen on the north side of the camp where many other prisoners, including the crew of the Dusty Breeze were being held.

Kira remained shape-shifted and was able to move about with relative ease. She relayed information to those in the pen. She reported that Li-Am and Iorskan were being treated well and had toured the camp with several disturbing revelations. Firstly, the Dray forces were amassing an army of undead and dray to begin to lay siege to Balic and the other city-states. These Dray were of a different breed than those seen in the Tyr Region (which they called outcasts) and had the outcasts performing all sorts of menial tasks for them. Secondly, the undead that they were creating were from the former inhabitants of the island as well as any non-humans that this army had captured. They were being interrogated and then slain and raised as zombies to be disposable troops. Finally, the humans that were captured were being sent back to Giusetnal to undergo transformation into Dray. The party learned that Absalom had perfected this process and they believed he was so successful by using an Orb of Kalid-Ma.

Before too long the captives and a large number of undead were loaded into one of the Dray ships and the vessel began its journey to Giustenal. Iorskan and Li-Am were aboard as well and being treated as honored guests. Kira, still assuming animal form, followed along, unsure where the loyalties of Li-Am and Iorskan were and unable to help those help prisoner by the Dray. After a week-long journey the vessel came within sight of the ruins of Giustenal.

I had no idea how you were getting off the island, but you managed. I’ll be very interested to see how you get out of this mess.

I may have accidentally fucked us over.