Swift Departure
Early in the morning, the party was awoken by Maserak telling them that it was time to go. They were to meet their contact, Captain Daclimitus, at the eastern most dock. He would take them where they wished to go. Maserak cautioned that the Captain was trustworthy, but not a member of the Alliance.

Maserak was visibly shaken and informed them that time was of the essence because he believed that a group of Templars was on their way to the hideout. He feared that they had learned of his location at the Thespian House. The party suggested that he come with them, but Maserak was unwilling to abandon his post. The party had no wish to get involved with a fight and left him behind and they fled.

Although the morning was still early and the winds had picked up blowing fine silt into the town, the party was unlucky and the Templar patrol spotted them. A swift pursuit ensued with the party heading towards the Harbor Precinct. The party made excellent progress, pushing themselves to the limits of the endurance. Although not very familiar with the streets of Balic, they were able to distract their pursuers.

Elleandra made use of her magic skills while within sight of several local shopkeepers setting up for the day and she was not careful enough to disguise her abilities. The phobic shopkeepers were horrified by the display of arcane power and a small mob quickly formed around the party, attempting to overpower the party. Li-Am, Jarvix and Morg attempted to escape the mob, while the rest turned to face them. Their intent was to not harm the people and eventually they demonstrated that they were beyond the abilities of the mob and it dispersed.

The short engagement with the mob did not allow the pursuing Templars to catch up to the party and the group was able to reach the eastern most dock. They found their ship waiting for them as promised and were greeted by a man who introduced himself as Daclimitus. Daclimitus provided some basic ground rules for the voyage and then they set out on the Dusty Breeze, a craft powered by a psionic orb and capable of levitating above the silt.

The Sea of Silt
Out on the Sea of Silt, the party settled into a routine. Most stayed out of the way of the crew as much as possible and kept below deck. Jarvix was keenly interested in the psionic helm and spent his time learning how it worked. Iorskan spent his time above deck, for he alone was made uneasy and somewhat ill by the Journey. During the first day the vessel rounded the Dragon’s Palate on the south side to avoid the majority of the outposts of Balic and then headed into more open silt.

During their second day, a terrible silt storm raged halting them for the day. It was during this time when all were below deck that the party had an uncomfortable series of conversations. Li-Am was confronted about his past and his recent actions. Jarvix lead the questioning but the others in the party supported him. The primary concern was his recent obsession with the Skull of Dorag Thel and his intentions regarding it. Jarvix felt that it would be better in another’s possession. Only Morg spoke out in support of Li-Am, to the surprise of Jarvix, and pointed out that nobody was questioning the motive of Kira or Iorskan, who they had known for the same length of time. Li-Am said that he would have none of the conversation and refused to take part in any further discussion. As a show of trust Morg presented Kira with the Heartwood Spear that he had been carrying since Vinara’s death. 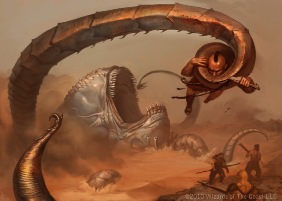 The third day was calm and the Dusty Breeze was able to get underway again. However, their travel was briefly halted when the ship came under attack by a giant Silt Horror. The beast latched onto the ship and started to pull it apart and attack the crew and passengers. The party was able to successfully defend the ship and prevented any of the crew from being dragged into the silt. Daclimitus surveyed the ship and found it to be capable of travel, but suggested they make for the island of Waverly for repairs and supplies. Trusting the Captain’s judgement, the party did not argue.

The remaining journey to Waverly took another four days. The winds continued to swirl up silt, but the ship was able to continue moving. During these days, the party mostly kept to themselves, as there was still tension regarding their earlier conversation. There was a brief discussion on where exactly to go after Waverly. Li-Am suggested making landfall sooner near the Pristine Tower and making an overland journey to Giustenal through the Beastbarrens. Another option was to round Giustenal and land in the trade village of Cromlin. A decision was not reached by the time they reached Waverly.

Isle of Waverly
According to Daclimitus, the Isle of Waverly was a long abandoned city that was commonly used by Silt Sailors for resupply of fresh water. There were no permanent settlements on the island and an unspoken covenant allowed sailors to come and go with little fear. When the isle came into sight, things were not as the captain said they would be.

A large encampment was visible on the western beaches and dozens of humanoids could be see seen moving about a large number of carefully laid out tents. The humanoids were large and could barely be made out to be Dray. There were banners laid out in the encampment each with the symbol of a large dragon skull with its eyes closed – the sigil of Dregoth.

Confused by the presence of the Dray, Daclimitus rounded the isle to the south and made landing on the western shore. Hopeful that they were not noticed, the crew began to make repairs as quickly as possible.