Reflection
The battle with the demons had been intense and while they recovered, the group came together to reflect on what they have been trying to accomplish over the last few months. They discussed their individual goals as well as their overall objective of trying to help restore Athas to the Green Age. Although everyone had their own reasons they reaffirmed their commitment to each other. Morg in particular attempted to set forth a strategy of gathering allies and weapons that would be essential to the success of their endeavors, framing it in the context of a gladiatorial combat.

While recovering from the battle with the demons, the group recalled various stories they had heard about similar creatures and the strange red crystals. While most of the legends were vague and shrouded in the distant past, they commonly referred to a disease called the Abyssal Plague; a highly contagious disease that gives the infected great strength but also an insatiable hunger for destruction. Each of the party had come into contact with the disease while fighting the creatures, but only Jarvix and Elleandra showed signs of infection.

Concerned for their health, but unable to do anything at the moment, the group collected their strength and returned to the surface. Having overcome the hazards on their way to the cavern of the Crystal of Ebon Flame, it was relatively easy for them to make it out without any hardship.

Planting the Tree
Upon returning to Kled the group met with Lyanius to discuss their discovery and their plans for planting the seed. Once again they were treated as heroes for surviving the perilous caverns and returning with news of the missing dwarves. Lyanius was very wary of the crystal, even though it could contain a divine spark, the curse by the primordials made him unwilling to have it remain in Kled. It was agreed that the crystal would remain with Morg and his allies and that the dwarves would seal off that section of the caverns.

When they presented their case for growing a Tree of Life in the ruins of Kemalok, Lyanius was initially quite concerned about the attention that it might draw to his city. The secrecy of Kemalok was paramount in his mind. The group was able to convince him that they would be able to help protect the tree and Kled while ensuring the safety of Kemalok. Jarvix offered to enlist the Veiled Alliance of Tyr to provide training and to help defend the dwarves.

Eventually Lyanius was swayed and they decided that the seed we be planted outside the Tower of Buryn where Rkard could also watch over it. A small group of chosen guardians accompanied Lyanius and the party into the ruins of Kemalok where Rkard allowed them to pass into the courtyard. Vinara planted the seed of life in a small mound of sandy earth and precious water was sprinkled upon the ground.

When the seed was planted in the sandy earth, silence fell upon the courtyard. Within moments a tiny pale green shoot could be seen rising out of the small mound in which the seed was planted. It began to sprout and take root quickly growing into a small sapling. However, the growth slowed and stopped as suddenly as it began. Knowing that the seed had been drained during the resurrection of Kalak, Vinara, Gwyn, Morg and Kelvor all sacrificed some of their life force to the seed to allow it to continue to grow. The sapling grew into a sturdy tree about 15 feet tall before settling down. 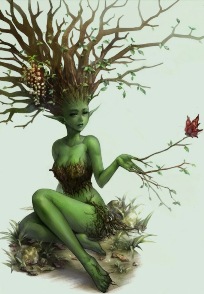 Vinara announced her intention to become the guardian druid of this tree of life. She hoped that by protecting and nurturing this tree, more trees could be grown, potentially creating more Heartwood Spears to be used against the sorcerer-kings and other defilers.

A change came over Elleandra as well – she became elated and began to dance around and climb on the tree. As she did so, she shed her clothes and changed her physical form to match that of the tree – barky skin, leaves and vines. Nothing like this had happened in Athas for thousands of years.

Festival of the Soaring Sun
Elleandra needed time to bond with her new tree and the others utilized this time to help train the dwarves to better be able to defend their home. Lyanius requested the Morg stay through the upcoming festival of the soaring sun, which was just over a month away, and he agreed. During the following month, each of the party members worked with the dwarves.

WIth the efforts of Jarvix and Gwyn, the Veiled Alliance sent a small group to establish an outpost in Kled to speed up communications in the event of trouble. A few of the dwarves even showed some aptitude with the Way or preserving and the Veiled Alliance worked to train them to use their powers.

Elleandra and Vinara spent most of there time with the new tree and showing the dwarves how best to care for it. The new tree took root quickly, and over the weeks, flowers spring across the cavern floor, vines began to snake across the slopes, and the tree of life began to flourish.

Morg and Kelvor saw to the organization of the dwarves into a more well-defined fighting force. Much to Morg’s surprise, he discovered that when he was holding the Axe of Rkard he was able to now read the dwarven writings, and the two also spent time pouring over the many of the old writings that had been discovered in the ruins.

The festival itself was a very important time for the dwarves, who practically revered the sun. The festival marked the turning point where the sun began to be higher in the sky and shine more intensely. Lyanius felt that this change in the seasons coinciding with the possible change in Athas that started with the planting of the Tree of Life was no mere coincidence, but rather a sign confirming the party’s role in the restoration of Athas.

On the last day, as the party began their preparations to head south to the ruins of Kalidnay, Lyanius presented Morg with the Belt of Kings as a gift for dedication to the protection of the Kemalok.