Combat with the Anathema began with the monstrosity taking a particular interest in Jax. Daqiq unleashed arrows while Jax and Gwyn fired off spells and Way-lynn mercilessly cut at it with his axe. Banoc did his best to damage the fiend while keeping his party members standing. After the Anathema was defeated, the party raced after Phyll.

Phyll continued to chase down the defiler, encountering more Yuan-ti along the way. The defiler drew life out of Phyll’s body to fuel the arcane spells he cast. The defiler was eventually caught in a flooded cavern and dispatched with a series of blows from the Heartwood Spear. From the water emerged another multi-headed creature – a hydra. The beast was able to inflict some wounds on the party, but was banished to another realm by Gwyn’s magic.

With the Hydra and Anathema vanquished, the remainder of the Yuan-ti proved little threat to the battle-hardened adventurers. As they cleared the temple they uncovered additional prisoners who had not yet been sacrificed to Dendar the Night Serpent, the god of the Yuan-ti. The temple also contained a modest amount of treasure, however, the defiler carried a longsword with a crystalline hilt. Banoc and Jax recognized this as the Sixth Sword of Tyr. She took the sword and performed the ritual to combine it with the other swords. 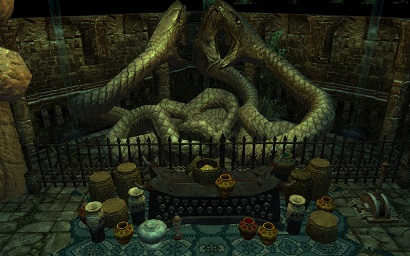 Romila was very pleased with the success of the quest and started preparations for moving their headquarters. The party assisted over the next week with the purification and fortification of the Fane. Banoc formally joined the Veiled Alliance of Tyr, having proven himself to be an ally. Romila was true to her word and provided the party with the location of a secret tunnel that would lead them to the sublevels of the Golden Tower of Kalak. She did warn the party that her information might be slightly dated as she had no knowledge of what Kalid-Ma may have changed since is occupation.

They checked in with Karlen and learned that his contacts were able to procure one item, a magical crystal ball of scrying. Although it was exorbitantly expensive, they had acquired a tremendous amount of treasure from the ruins of Yaramuke and the party was able to pay Karlen’s asking price. Phyll took possession of the crystal ball and began to study its properties.