After an uneventful night in Villa Nauripides the party woke and ate together as they continued their discussion about current events. Eventually they agreed to split up and pursue several different goals simultaneously. They also agreed to meet back at the villa in the early evening and share information and devise a more coherent plan.

Hunting the Hunter
Daqiq and Jax set out to do what they did best, learn about their prey and set a plan in motion to take him out. Today their prey was the templar Darian Haraxes who was responsible for the destruction of the Veiled Alliance in Balic. After Daqiq eliminated a minor templar guard and Jax assume her persona of a minor patrician, the pair entered The Praetorium and began to investigate. Through several conversations they learned the following…

Armed Forces
Lena and Way-lynn headed to the Guilder’s Precinct to look for weapons, armor and information about the current events in Balic and the other city-states. Lena stuck to the shops pretending to be a soldier of fortune and Way-lynn stuck to the drinking establishments attempting to learn any information that they could. After the day was spent, they learned the following…

Transportation
Gwyn traveled to the Elven Market outside the Agora, to try and gather information about passage out of the city to the deep Sea of Silt. She found that the market was really a collection of peddlers and not a permanent establishment like the one in Nibenayshe grew up in. She was shocked at how shabby the merchandise was and for once realized why the elves had such a poor reputation. After carefully observing, she made contact with Karis, of the Wind Dancer tribe, and learned the following… 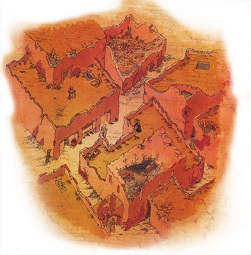 Banoc went searching for any signs of surviving members of the Veiled Alliance. He was not hopeful, given the efficiency of the eradication, but there were some newer members, Sestus for one, who might have escaped based on their relatively unknown status. The Elven Market did not turn up any clues but he did find Sestus at the Sandtiger’s Tail, a seedy establishment used from time to time as a meeting point for Alliance members.

Although both men were somewhat reluctant to divulge too much information, Banoc was convinced that Sestus was a good man. As they talked, Banoc learned the following…

Darian Haraxes took a liking to Jax and after a while he suggested that they leave and go some place more quiet. Daqiq had set himself up on a nearby roof and was waiting to ambush the praetor. As the pair came out, and Daqiq drew his bow, something alerted the praetor to trouble and he quickly cast a protective spell, Daqiq’s arrow hit and hit hard, but the spell absorbed most of the damage. The fight became more complicated as two other rooftop assassins, likely guards of the praetor, started firing at Jax. Jax summoned her Sword of Tyr and she and Daqiq manged to finish off the praetor. There was a brief chase and exchange of arrows, but the other assassins were defeated.

Lena and the others arrived to help clean up and they put the praetor’s body in Gwyn’s bag. Feeling pleased with the justice they dispensed, the group was also suddenly rather nervous and eager to leave the city before they were found out. At Gwyn’s suggestion they headed to the Furled Sail to attempt find a way out of Balic and onto the Sea of Silt.

Fleeing the City
At the Furled Sail, Jax assumed the form of Darian Haraxes and stayed off to the side with Gwyn. Daqiq kept his distance acting as a look out in case they were followed. The rest made contact with Regulus, the captain of a silt skimmer who was available and able to take people out of the city with no questions asked. Unfortunately, although he was willing, his price was too high and he couldn’t be talked down to a an amount that the party could afford. However, there was another, more dangerous option – to steal a silt dromond from the Arsenal.

Regulus agreed to provide the crew for the ship, including a psion who would be able to power the helm and take the party into the Sea of Silt. The party agreed to steal the vessel and give it to Regulus. They decided the best course of action would be for Jax (still in the form of Darian Haraxes), Gwyn (posing as his companion) and Daqiq (in the templar guard attire) to make their way into the Arsenal. They felt that they could allow the others, Regulus and his crew into the Arsenal and steal a ship.

Given the urgency, they immediately headed for the Arsenal…