Giustenal
As the silt skimmer approached the ruins of Giustenal, Jarvix had some time to review what he had learned from the writings recovered from Waverly. Although he found no mention of dragons, avangions, or Rajaat, there were some discussions of other champions. Dregoth was mentioned as the Ravager of Giants and Kalid-Ma was named as the Minotaur Terror. One champion, Myron, was called the Troll Scorcher and he was apparently killed and replaced by Manu who took on the same title. None had heard the name Manu, but it had a striking similarity to Hamanu, the sorcerer-king of Urik.

When the vessel finally arrived at Giustenal, it slowed to maneuver among the ruins of the city which stretched out into the Sea of Silt. The hordes of undead were unloaded and sent off into the ruins and the party and the other captives were escorted up to the surface. There they could see the massive city of Giustenal half buried by the Sea of Silt and positioned at an odd angle, as if the entire city had been sunken. Off in the distance a haze created by boiling tar pits blocked most of the view of the ruins.

The party waited on what appeared to be an old wall and was told that they would be momentarily taken to Absalom. The dray captain cautioned Jarvix about using the Way and informed him that their books and other heavy gear would be carried down for them. The party was tempted to escape, as there were only nine guards including the captain, but decided against it as their options for getting off the wall were not apparent.

Within a few moments a platform rose from the ruins of a tower connected to the wall and another party of dray, half of whom appeared to guards joined the first group of guards. The other half of the party appeared to be outcast dray and were assigned the menial task of carrying the books and mundane gear of the party. Once all were positioned on the platform one of the guards, who appeared to be a defiler, spoke words of magic and the platform began to descend through a series of tunnels.

Morg studied the walls and was amazed to find they were not constructed by any craft known to him – they appeared to almost have been grown. Jarvix was studying the walls as well when he suddenly appeared to dissociate and then collapsed to the floor of the platform, visibly shaken by something. There was no opportunity to discuss his condition as the platform moved through a series of tunnels. After a few minutes, the platform leveled out, moved horizontally and then stopped at the entrance to a massive cavern.

The entrance to the cavern was secured by a massive gate and two towers. The gates were made from a combination of stone and large bones, giving the entry way a grand and ominous appearance. Dray guards could be seen in the towers and as the party approached, the gates appeared to open on their own. As they approached, the more observant members noted that the bones of the gates appeared animated as some horrific golem and that was what caused the gates to open.

Beyond the gate the adventurers were amazed to see a small city spreading out before them. As they were escorted through the city, they saw sights that they might see above the surface. Merchant shops and other businesses were mixed with residential areas along a large central avenue. Although the buildings were familiar, the inhabitants were all dray.

The party could make out a magnificent structure made from gray stone with crimson scales, trim and other draconic decorations. In the center of the building a large steeple could be seen, decorated with dragon scales. The doorway was carved to appear to be a dragon’s mouth, with the portcullis being formed by the creatures teeth. This was a temple of the Dragon, where the faithful gather to hear the words of Dregoth.

The wonder continued as off in the distance the party could see fields of strange plants and pens of even stranger beasts. The most amazing sight was a large river of cool, clear water, flowing through the center of the cavern. The river was over 200 feet wide and numerous floating ships could be seen moving up and down the visible section. This was another of the many gifts that Dregoth had bestowed upon his chosen people, according to their guards.

Beyond the river were more homes and shops but as the avenue rounded to the left a strange forest was visible on the right. Trees were growing from the ceiling, their limbs reaching down and stretching out into a canopy of leaves, their roots winding their way upward. The trees were bearing fruit.

More wonders of the city were revealed to the party as they continued. A beautiful building of ivory sandstone was capped in black obsidian, as towers of similar design rose behind it at varying heights. The party’s eyes were drawn away from that structure to their final destination: a stark and oppressive structure set behind a wall of black obsidian, its surface decorated with giant bones. A huge ribcage of bones made a walkway from the gates to the palace.

Absalom
The guards led the party through the ribcage of bone and up through a massive set of doors into an entrance hall. The massive doors were opened and the party was taken into a huge chamber made of gray marble inlaid with a turquoise image of a dragon. Atop a stepped platform sat a throne of polished marble. The guard captain left them in the company of the other guards to go find Absalom.

Although their guards were attentive, the did not appear to care if the party explored the room or talked amongst themselves. Jarvix took this time to tell the party about the vision he had on the platform. They had a brief discussion but it was cut short by the arrival of Absalom. He was a tall dray with black scales and appeared to be not entirely alive. He carried a large sword in one hand and an obsidian Orb in another.

He greeted Li-Am and Iorskan, thanking them for delivering the party. He promised that Iorskan would be the general of the outcast dray, and that Li-Am would be the high templar of Dregoth. The party was taken aback and unsure of where the loyalties of their two friends were. Without warning Li-Am and Elleandra dove for the Orb, attempting to wrest it from his hands. Neither was able to secure the Orb but it created a momentary distraction and Kira shifted from a small lizard into her favorite form of a tiger and pounced on Absalom, savagely ripping into him.

Jarvix emanated a hypnotic ripple of psychic influence among the dray, stunning the majority of them, while conjuring a shard of nothingness to hold them fast. Iorskan let his true loyalties be know and orchestrated a devastating coordinated attack on Absalom as he called out “You did a shitty job of making these dray!” Elleandra made another grab for the Orb, but Absalom twisted away and Elleandra summoned illusory barriers around him causing him pain when he attacked. Morg called upon his reserves of strength and made a strike at Absalom at an odd angle catching the dray off guard and wounding him deeply.

Absalom teleported to a more advantageous position, slashing at Iorskan and siphoning his spirit. As Iorskan’s spirit faded, some of Absalom’s wounds healed. The dray guards rushed in attacking Elleandra and Morg. and wounding them deeply. Jarvix and Iorskan attempted to keep their friends standing despite the damage being inflicted on them. Iorskan attempted to keep Absalom’s attention on him by continuing to insult Absalom’s potency as a dray.

The battle continued back and forth until Elleandra finally managed to grab Absalom’s Orb, a look of triumph on her face. Before she could merge the Orb, Li-Am snatched Absalom’s Orb from her. The party breathed a collective sigh of relief as the all too real prospect of the return of Kalid-Ma suddenly didn’t feel like a good idea. Still urged on by her Orbs, Elleandra tried to grab the Orb back from Li-Am, but was unable wrest it from his hands. Li-Am turned her lunge to his advantage and barely managed to get a hold of her Orb. With a swift motion and a smile on his face, Li-Am combined the Orbs.

With a pulse of dark energy and a snapping sound, the Orb flared and cracked issuing forth a stream of black smoke. Helpless to do anything except watch, the smoke coalesced into an ordinary seeming man. Within a look of satisfaction on his face, his body grew and changed into a magnificent and terrifying form of a mighty dragon composed of living shadow, a being of darkness and defiling magic – a creature of nightmares. Its large hand extended towards Li-Am “Your loyalty will be rewarded, you shall be my High Templar”. Too stunned to react, all the party could do was wait to hear Li-Am’s response… 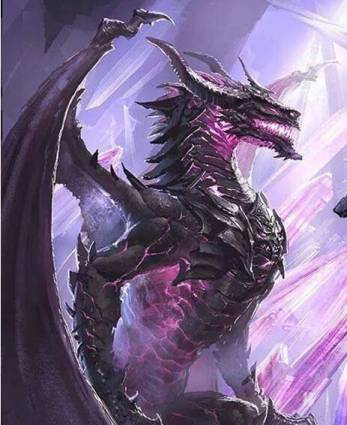 A wonderful session filled with great questions and excellent roleplaying. I was very pleased at the number and quality of in-character decisions that were made. Good stuff!

Very well written and I so excited for the next session.