Strange Magic
As the group rested following their escape from the crypts, they questioned Delen about the magic he displayed during their combat with the undead dray. Delen explained that he was indeed trained in the arcane arts, but he explained that his magic drew energy from the Gray. Although those necromantic powers were not unheard of, they were quite uncommon and somewhat sinister in reputation. The party conceded that he had done nothing to make them suspicious of his motives and so they were willing to accept his explanations, for now.

After their rest, they proceeded up the stairs until the reached a landing which appeared to open to the main floor of the fortress…

Main Floor
The main floor was sprawling and the party took a long time exploring the many rooms. They encountered many gith fighters wearing metal armor and wielding metal spears. The gith were fierce combatants and more well-trained than those previously encountered by the party while in the Black Spine Mountains. After dispatching about a dozen of the gith, the party discovered two exits from this level. The first they found appeared to be the main exit leading to the outside, while the second was another stairway leading to the upper level of the fortress.

Although they were tempted to leave the dangers of the fortress for the more familiar dangers of the outside world, they eventually chose to continue their search for the banner and entered the upper levels…

Upper Level
The party found the upper level to be slightly smaller than the main level and infested with mindless zombies that appeared to be the missing miners and soldiers from Nibenay. Each zombie was easily defeated, but their numbers made them quite dangerous. 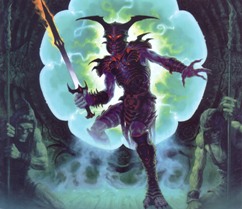 As Delen rounded a corner he came face to face with one of the strange gith warriors, armored in black metal and wielding a massive silver sword. Behind him a large banner with a draconic image was visible, undoubtedly the Standard of Arkhosia. With a wave of his hand, the warrior pushed Delen prone and immobilized him. With a cruel thrust of the silver sword, Delen was impaled and fell unconscious.

Gwyn, who was close behind Delen, was able to injure the warrior, but was quickly put down as well. The ease with which he incapacitated their allies greatly concerned Jarvix and Iorskan, who were barely able to keep the two alive. The warrior’s position prevented any type of direct assault and they feared they were outmatched in any event. Elleandra was able to maneuver around the warrior after Jarvix blinded him to her movement. She retrieved the standard and fled as fast as possible towards the main level and out of the fortress.

Jarvix, Iorskan, Gwyn and Delen all followed Elleandra out of the fortress as fast as they could, with Way-lynn the last to leave the warrior behind. The warrior pursued and Way-lynn feared he would be overtaken, but luck was with him and he was able to outpace the warrior.

Flight to Nibenay
The group did not stop once they lost sight of the warrior, for they feared he would keep up the pursuit. They decided to head back towards the city-state of Nibenay. They hoped that there they could rest and regroup. Although they did not have a full picture of the situation in the mines, they hoped that the templar-wives of the Shadow King would be satisfied.

As they retreated from the fortress, they discussed the possibilities of returned and claiming the fortress for themselves. The arcane circle they discovered would be a powerful tool for consolidating their forces for their eventual engagements against the sorcerer-kings and their armies. The close proximity to the ruins of Giusental made them wonder if the strange gith were another of the armies under the command of Dregoth.

They traveled with great speed over the next two days, stopping only to rest when they were too tired to continue. They used their combined skills to avoid all of the gith patrols that may have been looking for them while they were in the mountains. Once in the open desert, they made good speed back to the crossroads and came within sight of Nibenay.

I’m definitely on board with the “go back and take the spooky fortress for ourselves” plan.