Black Spine Iron Mine
Before venturing into the mines, the party took a brief rest and, as usual, reflected on the current situation. The conversation had a different tone than normal because of the presence of Delen, and somewhat Way-lynn. Despite the different goals and views, each agreed that it was still in their best interest to continue working together.

Delen felt that their adventures had been and would continue to be a source of great knowledge, which appeared to interest him greatly. Elleandra still believed that her home in the Lands Within the Wind was still in danger and with her tree in the village of Kled, she had strong protective feelings towards this world. Gwyn wanted to resume her quest to stop the use of destructive magic. Iorskan felt that he was destined to unite his people and wanted the freedom from slavery at the hands of Dregoth. Jarvix enjoyed the prospect of uncovering more of the true history of the world and his loyalty to the Veiled Alliance shaped his desire to put an end to the tyranny of the sorcerer-kings. Way-lynn had seen too much corruption in his city-state of Nibenay and knew that only by preserving the little remaining nature could the death of the world be halted.

They all headed into the iron mines, hoping to discover what had happened to the Nibanese miners and soldiers that disappeared. Delen, feeling most comfortable in the dark tunnels, lead the way, constantly searching for clues and traps. Before long they ran into groups of gith miners, equipped with steel mauls for breaking the rocks. The mauls were also equally good as weapons against the party and despite their lack of training, the gith were able to inflict many injuries in the ensuing combats.

In addition to the gith miners, Elleandra encountered another of the mysterious warriors that resembled more intelligent gith. There was no conversation with it and although it was defeated, there was still no indication as to who they were or what they wanted. The party was able to defeat the gith they encountered very quickly and they hoped their presence was mostly unnoticed in the mines. They realized that the mines were far more expansive then expected based on the short time it since it had supposedly been discovered. The party was not sure if the mine had been operating longer then they thought, or if it had broken through to older tunnels.

After many hours of searching and fighting, Elleandra discovered a secret cave which lead to a tunnel rising upwards towards the center of the Black Spine Mountains. Hopeful that this might lead to the dray stronghold, the party decided to abandon the mines and see where this lead them. They followed the tunnel for many miles, going further into the Black Spine Mountains. Along they way they found increasing numbers of runes and symbols in old draconic and Iorskan’s hope began to rise that they were headed to the ancient fortress of his clan.

Arkhosian Crypts
Eventually the tunnel they were following reached a very old and broken stone door. Beyond the door was what appeared to be a crypt. The slightly larger proportions and iconography left little doubt that it was a crypt of the dray. There were no immediate signs of dangers in the dark expanse before them, but when they crossed the doorway, a number of skeletal dray rose from the ground and began to approach. Wanting to avoid conflict with his ancestors, Iorskan attempted to persuade the undead that he was on a mission to restore their clan. Although the others in his group showed respect for the dead, the dead would not let them pass through the crypts. 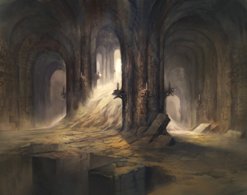 Reluctantly Iorskan decided that moving through the crypts was the best option and so they fought their way through the Arkhosian undead. The skeletons still possessed much of the prowess they had in life and the battles were hard fought. Although the group attempted to move through as quickly as possible and avoid the crypt guardians, they were not particularly successful. During the fights, Delen displayed several unusual capabilities that they first dismissed as simply unusual gifts. However, it soon became clear that Delen was gifted with the arcane arts, although the exact nature of his magic was unclear.

During the exploration of the crypts, Jarvix made another amazing discovery – and arcane circle. This circle was similar to, but much older than the other’s he had seen in the ruins of Kalidnay and the city of Moil. With some time and study, he felt that he’d be able to use the Way to teleport himself and others to this circle from great distances. Near to the arcane circle, the party discovered a stairway leading up to higher levels of the fortress. The group had defeated all of the skeletons they had encountered and decided to risk taking a quick rest to tend to their wounds.

I don’t think I realized that I had a connection with Moil as well! This is great news…