Swift Pursuit
Birk and Arnye gathered supplies and then headed out from Altaruk in pursuit of Tethrades. The pair of Veiled Alliance members moved swiftly as the defiler had at least a 4 hour head start on them. Birk was able to quickly locate his tracks and they followed the main road north towards Silver Spring. Despite the head start, Birk and Arnye were able to catch up to their prey after about nine hours of travel.

Tethrades and his guards had made a small camp off of the main road and Birk was able to maneuver around the rocky terrain to get close enough to hear their conversations with his hearing augmented by the Way. The guards, which consisted mainly of humans, appeared tired and were complaining that Tethrades had pushed them too hard in the cold early morning hours. Tethrades himself appeared exhausted and remained slightly apart from his guards, his attention focused on the stolen Crystal.

Birk and Arnye debated on the best course of action. They were instructed by Arisphistaneles to follow Tethrades but the opportunity to attack while the guards were exhausted was tempting. They initially decided to wait until dusk, but realized that Tethrades and his guards might have recovered their strength by then, so ultimately the decision was made to attack then.

The two attempted to sneak into the camp and attack with the element of surprise, but a bad step by Arnye sent rocks tumbling and alerted the guards to their presence. Arnye and Tethrades’ guards clashed into each other and the mul was quickly surrounded but able to hold this own for a while. Birk began circling the battle attempting to assist Arnye while making his was over to engage Tethrades. Eventually his guards were defeated and both Birk and Arnye caused serious injuries. Tethrades used his magic to severely wound Arnye and then to escape. Birk tended his friend’s wounds and then the pair set out after the lone defiler. 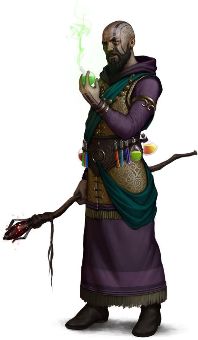 Tethrades was moving quickly and using his magic to teleport, making tracking him very difficult. Birk was able to keep on his trail and the pair eventually caught site of their prey. Knowing that he couldn’t outrun his pursuers, Tethrades began launching bolts of lightning at Birk and Arnye attempting to force them to halt their advance. Although his spells struck true, the toughness of the pair allowed them to continue despite their injuries.

The fight was quickly ended although as he was about to fall, Tethrades used the Crystal to summon large swarms of beetles which attempted to infest Birk and Arnye. Neither were overcome by the beetles but Arnye was forced to flee from the battle as Birk danced around repeatedly striking with this staff and scattering the beetles. When the last of the beetles were destroyed, Birk was able to locate the Crystal and carefully avoided touching it as he took possession.

Arnye beheaded Tethrades to ensure his death and provide a gift for Morg, who was sure to be upset at not being able to enact his revenge. Other personal possessions of Tethrades were recovered including his spell scrolls and large number of coins – ceramic coins from Balic and Draj and metal coins with the stamp of House Madar on them.

After resting and tending to their wounds again, the pair headed back towards Altaruk, eventually reaching it around noon the day after they left.