Race Against the True
The group moved deeper through the Ziggurat, Morg and Vinara noticed they were moving from beneath the Ziggurat and likely near the Golden Tower. They eventually found themselves before a room that looked to have once contained a great wealth of items, but was now filled with debris. Badly burned bookshelves, empty and broken chests and stone tables with broken items were all that was left of the room’s contents. As they took in the scene, two bloated mummified heads appeared from behind a bookshelf and floated a little closer to the party.

Curious and disgusted by the foul creatures, the group wanted to know about what the help they offered. The heads promised to show them short cut through the passageways so they could catch up with Merric. They claimed that without their help, it would be too late. When asked what the help would cost, they licked their lips and replied…

“We are so hungry. We need to drink from you.”
“A curse.”
“A terrible curse.”
“Not our fault. The treachery of others.”

Nobody in the party felt particularly comfortable with letting the creatures drink from them, nor were the heads willing to bargain with Morg. Feeling they were at an impasse, the group cautiously moved passed Sacha and Wyan, who continued to beg for a drink and to try and convince them of the need for help. However, they did let them pass. While moving through the room, Jarvix noticed an unusual bone scimitar and collected it, suspecting what he had found, he gave it to Kelvor.

The group made their way slowly through the maze of tunnels and rooms. They encountered many traps and narrowly avoided wandering shades. The dark energy flowing through the passageways served to guide them, but also took its toll, beginning to tax their stamina. It was difficult for them to tell how long they traveled and they began to question their decision to not accept the offer of assistance.

The Return of the King
Finally reaching the end of the twisting, horrifying corridors, the party came to a long hallway, the walls of which were covered in murals made of gems and bone. The murals depicted a male human in black metal armor battling brutish humanoids, with what looked very similar to the city of Tyr in the background. As they moved down the hallway, the human took on more and more draconic features, almost transforming iuntil he matched the image on the amulets of the True. The archway at the end of the hallway had a human figure on one side and a full draconic one on the other.

The archway opened into a large, circular room filled with a swirling cloud of ash. At the far side of the room they saw Merric and three robed figures around a pitted basalt alter. On the altar were four intact obsidian spheres and several broken orbs. Elleandra could feel one of the orbs calling to her orb. Also visible on the altar was the seed from the Tree of LIfe. Off to the sides, partially obscured by the ash a dozen or so True guards could be seen as well.

Morg announced their presence and combat ensured with the guards attempting to stall the party long enough for Merric’s ritual to be completed. Kelvor moved to engage Merric while Gwyn and the others focused their attacks on the guards. Using his skill with the Way, Jarvix slipped passed a number of the guards and pulled the seed from the altar to himself. The guards proved relatively easy to dispatch, but the robed defilers caused a great deal of trouble as the hurled ashen bolts. 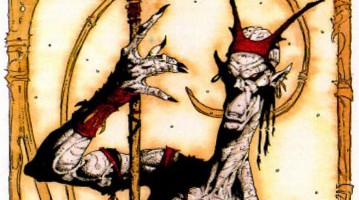 Not long after the combat started, the altar erupted, sending the orbs scattering and a large draconic figure emerged – a resurrected Kalak! Emboldened by his presence the True followers surged forward in a more vigorous attack. Aided by Elleandra and Kelvor, Morg swung his dwarven axe and struck true on the sorcerer-king, causing a massive wound that would have killed any normal person. So strong was his magic, that the wound, while painful, did not slow the beast down.

Kelvor was able to distract Merric with his scimitar and used a spike of psionic energy to cause him to harm himself. The blow from his own short sword was fatal and he collapsed to the ground. Elleandra summoned a jet of silver flame burning Kalak badly and forcing him to start draining the life energy from the robed cultists to restore his own health. The attacks of the sorcerer-king caused Gwyn and Jarvix to fall, but through the magic of Elleandra and Vinara, they were kept from death.

Morg struck the fatal blow on the former king of Tyr, causing his body to fall to the ground and crumble into dust. Elleandra recovered the orb and Kelvor retrieved the short sword form Merric’s corpse. Weary, wounded and grateful to be alive, the group found there way out of the Ziggurat, without encountering Sacha or Wyan, and prepared for a much needed rest.