Moon Chamber
As Morg, Vinara, Kelvor and Gwyn were recovering from their encounter with the exploding zombies each could feel the Ziggurat come “alive” in different ways. It appeared as if massive amounts of arcane, primal and psionic energy were being channeled somewhere. Although none knew for sure what was happening, they all agreed that it was bad and that there wasn’t much time.

The group wandered through the passages and descended a flight of stairs sized for something much taller than a human. The eventually reached a large chamber that appeared to be carved from a single enormous block of obsidian. Holes in the ceiling revealed focused beams of pale green moonlight which bounced off of smooth obsidian mirrors. The floor was covered in mosaics of draconic figures in various states of metamorphosis. The room contained numerous clay urns carved to resemble a creature contorted in pain, trying to push the lids free. 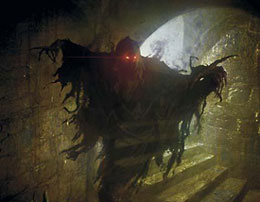 Cautiously the group entered the room and moved towards the only exit. As they did so they began to feel energy stir as if the shadows were shifting within the stone. Foul apparitions rose from the clay urns and obsidian floor and walls. Their baleful gazes turned towards the party and the reached out with deadly intent. A few of the specters, sensing the power within Gwyn, Elleandra and Jarvix fled, but the rest proceeded to engage the party.

Most of the spirits were swiftly dispatched, but their large numbers proved to make them a difficult challenge and they moved in and out of the walls surrounding the group. Two of the wraiths were significantly more powerful then the others, radiating a foul cold that pierced flesh. The immaterial forms continued to regenerate and took little damage from weapons and spells used against them. The group eventually felled the spirits, but took many wounds. Vinara was able to heal the group, but they decided to push on deeper into the ZIggurat, rather than loose more time resting.

Fly Trap
Weary, but determined, the party descended more stair covered in tiled obsidian. The obsidian all around them began to glow as if humming with power. The passageway opened a larger room containing a half-dozen cells of various sizes and shapes, their bars composed entirely of obsidian. Each cell contained several gaunt bodies apparently pinned to the the walls, as if the obsidian was slowly absorbing them.

As the party surveyed the room, the tortured voices of the captives gasped and pleaded to be set free. With everyone talking at once, it was difficult to make out what was being said, but several phrases were repeated again and again.

“He left us here!”
“Merric traded us the these reavers for safe passage.”
“They are consuming us.”
“Free us from this torment.”

Wary of traps or deception the group questioned the captives attempting to determine if they were telling the truth. Several of the captives did actually appear to be member of the True, sacrificed by Merric for quick passage through this room, but about a half dozen did not. While the party debated what to do with the members of the True, the other bodies became insubstantial and moved from the walls, through the bars and began to attack. Not completely surprised by this turn of events, the party reacted quickly, but the reavers were empowered by the obsidian and proved to be more dangerous they expected.

Kelvor did his best to keep their attention and was successful although he suffered several nearly-fatal injuries, which only appeared to strengthen the foul undead. Elleandra’s magic kept her opponents distracted allowing her allies to maneuver into better positions, but still the fight took far longer than anticipated as each hero mainly attacked separate foes.

Although the creatures were defeated the combat consumed precious time and forced the to rest and tend to their wounds. The group pulled the members of the True from the walls and they all fled the chamber as quickly as they could. As they rested, the party began to wonder – “Are we too late?”

You are just in time, but in time for what?